TV5 announces "game-changer" plans for the last quarter of 2010 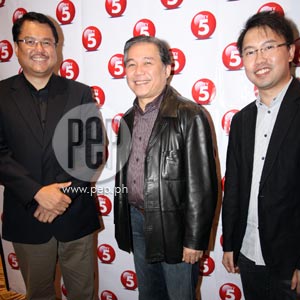 Almost two weeks ago, TV5 beamed over the news that its Saturday primetime slot bagged the second spot, thus overtaking ABS-CBN in the ratings race.

In an intimate presscon held at the Santan Room of EDSA Shangri-La Hotel last October 1, Barreiro highlighted that their "modest goal" when they launched TV5 early this year was to have a "double-digit share."

Generating 24.6% of the nighttime audience last September 18 moved the station's ranking from third—which went to ABS-CBN with 21.3%—to second place. The top spot remained with GMA-7, which got 34%. The figures were provided by AGB Mega Manila Individual Ratings.

Moving on, Barreiro related, "When we started, we knew that it was gonna be a very tough climb... When we started beating their programs for the Saturday night, and sometimes Sunday night, we did not expect to be able to beat them.

"We were beating them at certain time blocks in the morning, in the afternoon, and we thought that it would take us three years to be able to do that. So when we're able to do it on the first year, we were pleasantly surprised!"

But the ratings results, though a crucial indicator of the network's reach, is just one detail in the battle. The company's president and CEO, Atty. Ray Espinosa, described TV5's present status as "build phase."

He elaborated, "We're rebuilding everything. And when we say everything, it's literally everything—from the vehicle to the facilities to the building...everything...

"We're hiring talents, and when we talk about talents, we're not just talking about stars and newscasters and reporters, it's like everyone, including the janitors and the secretaries, and so all of them."

Even if the viewing public has started appreciating some shows in the network's menu, "you don't look at the income yet," remarked Espinosa.

He added, "You know that you'll incur losses in the first few years. But we do have a five-year plan, and based on the plan, we are working towards becoming profitable sometime in the Year 5. That's how we look at the whole situation."

THE "GAME-CHANGERS." This October, Willie Revillame's upcoming show is expected to disrupt the night viewing of Pinoys.

Espinosa described Willing Willie as "masa" and "masaya." Most of all, "It's a show na may heart kasi it gives hope and everything like that...

"Yeah, it's not in the traditional timeslot where it should be, but we're banking on the fact that people will also want to watch happy programs. It's a feel-good show.

"Yeah, there's a risk, but we think it will rate," he declared with quiet confidence.

The editors and writers got curious about the network's arrangement with the controversial host in terms of running the show.

As Espinosa put it: "The show is him, and he is the show."

Perci Intalan, head of production and creative services, affirmed that Willie has the network's 100-percent support.

The young TV executive resumed, "At this point, he does have a lot of ideas...overflowing with ideas actually for his show, and he had brought with him his team as well.

"And so what we did was we sort of agreed with him from the start that, 'You know what, just do whatever you think would work.' And he would present it to us...he would present the music, the dances.

"He's actually quite open to talking about it. It's not he's keeping it all and it will all be a big surprise to us when he's presenting it.

"And then what we're doing is we're just supporting where we can. And then, once he shows it on air, as with most programs, then you collaborate more and more when you see where it's weak, where the strengths are, what the audience is looking for.

"At the same time, we have given our trust in him because he has been doing this for quite a while already, and knows his market very, very well."

In exchange for the "creative freedom," TV5's only expectation is "mag-rate siya," said Intalan, smiling.

Aside from Willing Willie, TV5 will launch Laugh or Lose, a sitcom-game show to be hosted by Vic Sotto, and relaunch Batibot—which, according to Barreiro, will infuse the latest technology in its teaching style, and will still revive some characters like Manang Bola, and will be visited by its former hosts Kuya Bodjie and Ate Shena.

INFRASTRUCTURE DEVELOPMENTS. Improving the signal became one of the network's utmost priorities during its launch.

Leveraging on the expertise of its sister companies, PLDT and Smart Communications, TV5—according to Barreiro—now has a "70 percent reach." By the end of the year, they're targeting "85 percent national," and by June of next year, it should be "95 percent national."

Both ABS-CBN and GMA-7 cover 85% at present, said Barreiro. He added, "We're changing all transmitters and we're applying for new frequencies."

Another thing that Kapatid employees look forward to is the groundbreaking ceremony for TV5 Broadcast Complex in Boni, Mandaluyong City, which will happen this November. By 2012, Espinosa said the state-of-the-art facility will be able to house the network's live shows.

The press got curious about the company's biggest expenditures to date.

Espinosa revealed matter-of-factly, "Programming cost alone for this year, we would have spent by the end of the year over two billion pesos. And that will increase by another billion next year, so around, maybe, a little more than three billion. Expansion would cost around 10 billion, from this year to 2014, to build the entire facility."

TV5'S EDGE. When asked how these plans will change the television landscape, Barreiro answered, "It's changing the dynamics of the competition. These two players have been watching each other, and now suddenly, there's a third player.

"Very similar to the telco [telecommunications company], you know there used to be just two major players—Smart and Globe—and now with Sun into the picture, it changes the game. And that's what happens in television, too."

What sets them apart from the two TV giants?

Espinosa said, with more enthusiasm than arrogance, "We are hungry. We are determined...We are determined to succeed and achieve our goals, and obviously, our goal is, as people might call it ambitious or overly ambitious, to be number one.

"But your have to aspire to be Number One. And we are a determined group. We would put in our efforts, our resources to achieve that goal."

His parting shot: "Sheer determination can make you succeed in more ways than one."