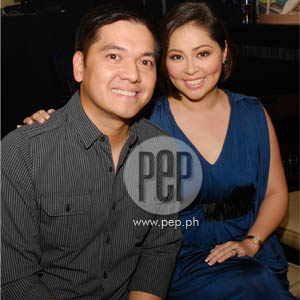 Angelu de Leon on management's decision to give way to her pregnancy: "I'm happy that they also thought about it. It really just shows how they love me and how concerned they are for me and the baby." At the event, she was accompanied by husband Lorenzo "Wowie" Rivera.

The 31-year-old bedimpled actress still manages to look as charming as she was in her T.G.I.S. (Thank God It's Sabado) days, and even so now that she is with child.

However unfortunate it was that she had to sacrifice her role in GMA network's afternoon soap Sisid, Angelu is certain that "God wants her to enjoy her pregnancy in a different light."

"The first few weeks of my pregnancy, I spotted," she shared. "I really had to make sure kasi... ayokong ma-bed rest."

Angelu experienced four days of bed rest, which she described as "nakakabaliw!"

Good thing, her colleagues in Sisid have been considerate.

"It was good naman of them to really take care of me din sa taping. They're very, very nice," she told PEP.ph (Philippine Entertainment Portal).

BYE SHOWBIZ, FOR NOW. Her condition made her decide to leave the soap, where she plays the mother of lead star Jackie Rice.

"They had to kill me sa role but it was fine, kasi parang sabi ko nga ano, e, bittersweet. Kasi, I really love my Sisid family, the people I worked with there."

Asked what she misses about working with them, the mom-to-be quickly quipped, "Yung kainan namin!"

She went on narrating what happens when the cameras are not rolling.

"So it's really more than work, it's family. Parang lagi kaming may excursion," Angelu said.

Now that she's pregnant she craves for "the sweetness of fruits." In Filipino, we call it paglilihi.

FUTURE STAGE MOM. The topic shifted to her daughters, Nicole and Louise.

What if they follow in her footsteps and enter showbiz as well?

A smiling Angelu said yes on one condition, "If they want to? I have no qualms about it. Yung sa akin lang...for me kasi, what I missed was my school life.

"So sabi ko as long as you can handle your priorities—school and then showbiz, [it's] fine with me."

"Sabi ko eventually naman, if it's really their destiny to be in showbiz, no one can stop them..."

And should this be the case, "Magiging stage mother din ako. My mom supported me all the way, so I'll be that mom also."

Angelu's eldest, 12-year-old Nicole, sings and is a skillful guitarist. Meanwhile, Louise, 10, plays the piano and sings as well.

Her advice to them is to hone their skills while in their youth.

She briefly recalled how the 90's program Ang TV served as her training ground, where she and her batchmates were taught to be "very versatile."

Most likely, her talented daughters must have taken after their mom. To this, Angelu beamed, "Tama!"