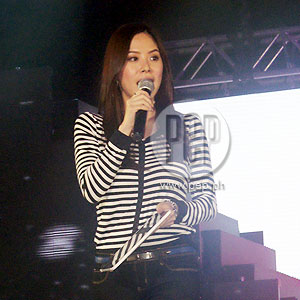 "I'm deeply offended that a journalist like Ellen Tordesillas would write an article of lies to sensationalize one's private life. I have never said anything remotely close to what her write up says I did. I believe the public deserves an apology from her," says Grace Lee about Ellen Tordesillas's article titled "Grace Lee sees self marrying PNoy," which hit the headlines of major dailies this morning.

"Lee revealed in an off-camera talk with a TV host that the President had offered to provide her security courtesy of a team from the Presidential Security Group. This prompted Presidential Spokesperson Abigail Valte to say the Palace would still have to review whether or not the mandate of the PSG can cover even persons outside the President's official family."

At sinundan niya ito ng: "I'm deeply offended that a journalist like Ellen Tordesillas would write an article of lies to sensationalize one's private life. I have never said anything remotely close to what her write up says i did. I believe the public deserves an apology from her. Furthermore, I would like to request Ms Ellen Tordesillas to name the source who claims to have spoken to me regarding the PSG issue as this is not to be taken lightly."

"It was her co-anchor DJ Suzy, not Grace Lee, a Korean TV and radio personality President Benigno Aquino III is said to be dating, who said the relationship between the two was headed for the altar.

"Lee made the clarification in reaction to a VERA Files story yesterday that said she saw herself tying the knot with the President.

"In a text message to Ellen Tordesillas, author of the report, Lee said, 'The only points about your article I want to clarify is that I never uttered the words 'altar' or anything that might hint of desiring marriage.'

"Lee later said in a phone interview with Tordesillas that the issue about she and the President ending up at the altar was part of the banter between hosts of the program 'Good Times in the Morning' which airs on radio station 89.9.

"Lee also said it was Suzy who replied 'The full length' when asked by New York-based Mo Twister how long the relationship would last.

"She also clarified that she did not say 'I'm praying for this," referring to her relationship. 'What I said is that I pray everything will go well,' she said.

"'It was my female co-DJ who teased me on the air and I laughed it off,' Lee said in her tweet earlier in the day as social networking sites ran the story.

"In the phone interview, Lee also denied revealing that the President had offered to provide her a team from the Presidential Security Group. 'It's not true. There was no security issue that I ever discussed with anyone,' Lee said.

"VERA Files sources had earlier quoted Lee telling a TV talk show host off-camera that the President had offered to provide her with PSG escorts.

"For her report, Tordesillas quoted from the conversations of the "Good Times" anchor during the show's episode on Feb. 8, which happened to be Aquino's 52nd birthday. She was listening to the program at the time."