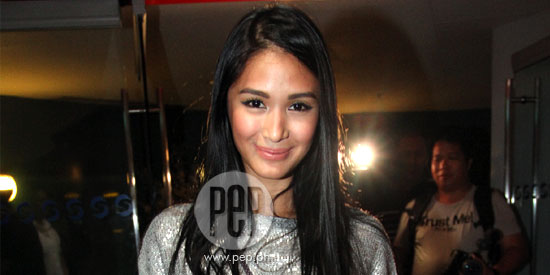 “I’ve been down this road many times,” says Heart Evangelista who ended her relationship with Brazilian model-turned-actor Daniel Matsunaga as confirmed by the couple’s statements over Twitter last Saturday, April 14. The actress tweeted, “Being single is embracing growth.” This was followed by Daniel’s tweet, “just asking God...why? i tried.”

This was the first statement that actress Heart Evangelista uttered the moment she stepped out of the escalator leading to Shangri-La Plaza Mall’s Cinema 4 where the premiere commercial screening of independent film Busong was held earlier tonight, April 17.

Heart was at the said event to render her support for her Legacy co-actor, Alessandra de Rossi who stars in Aureaus Solito’s internationally-acclaimed Cinemalaya film entry.

Heart initially expressed that she did not want to be interviewed about her breakup with Brazilian model-turned-actor Daniel Matsunaga.

It was just last April 14, Saturday, that the couple made their split public over social networking site Twitter.

After congratulating Alessandra for Busong’s achievements, Heart intimated that she and her co-actors in Legacy are tightly-knit bunch.

Heart admits that the cast members of the GMA-7 soap are helpful in getting her past the circumstances she is faced with at present.

“They make me happy.”

LIFE GOES ON. Heart brushed off questions that inquired how she is coping at the moment.

Complimented that she still manages to look beautiful in spite of the breakup, Heart smiled and quipped, “Thank you so much!”

While hesitant to answer any more questions, the actress relayed a message to her supporters: “Like I said, in the beginning of each relationship we hope for the best but there’s nothing… certain in life.

“There’s nothing permanent, there’s always change and you just have to always get ready for that… I’m okay naman.

“This is growth for everybody and I wish everybody happiness… this will probably be the best for everyone."

Will she carry on just fine?

“Yes, we will all be fine for sure. I’ve been down this road many times," she said.