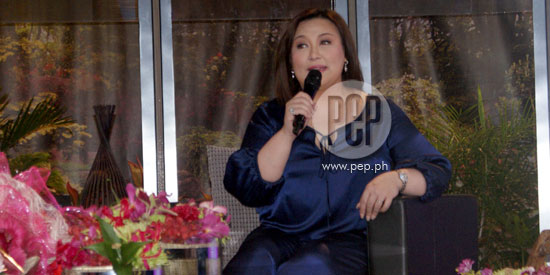 Sharon Cuneta had been doing her best to avoid Twitter-related controversies... until a few hours ago. This time she lost her cool because an ABS-CBN executive claimed on Twitter that he's aware of KC Concepcion's "baho."

(Every Breath You Take, the latest offering of Star Cinema, stars Piolo Pascual, the ex-boyfriend of Sharon's daughter KC Concepcion.)

SHARON REACTS. It didn't take long before the tweet reached the Megastar and ruined her day.

Her earlier posts about the Tulfo brothers' guesting on Sharon: Kasama Mo Kapatid were followed by a series of retorts addressed to Eric.

Some of her tweets a few hours ago:

Eric, what's the problem with my daughter? Has she done anything karumal-dumal? Or do you guys just choose to have a problem with her? Di ba puedeng mag-move-on na lahat?

Then she dared the executive to back up his claim:

Shawie (her nickname) added, "If KC has done anything to upset anyone, or bring shame to our family, or ruin my trust in her, or ruin my NAME, AKO MISMO ANG BUBUGBOG SA ANAK KO AT HIHINGI NG TAWAD SA PUBLIKO BAGO PA MAKARATING SA MGA NANINIRA."

At press time, the actress-host-singer posted 45 tweets about the subject. In between, she managed to joke, "Isusumbong ko kayo sa lahat ng Tulfo! Hahaha"

But she couldn't hide her disappointment. "Sobra lang this time," she tweeted.

Shawie also underlined that she didn't expect the remark to come from the advertising and promotions head of ABS-CBN, where KC is a contract star.

GETTING ERIC'S SIDE. Meanwhile, Philippine Entertainment Portal (PEP.ph) has already gotten in touch with Eric and Roxy Liquigan, Star Cinema's adprom director, but we have not yet received any response.

PEP will readily publish any statement from ABS-CBN, Eric, and the Kapamilya people who got dragged into the issue.