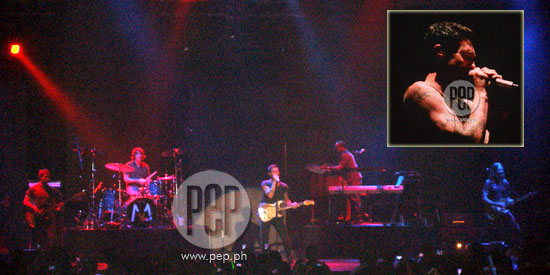 The energy never died down in the hour-and-a-half show that American poprock band Maroon 5 gave Manila on Tuesday night, September 18, via their Overexposed World Tour concert.

It is the international group's third time to hold a concert in the country.

Every row, aisle, and seat from the General Admission to the Patron sections of the Smart-Araneta Coliseum was crammed with spectators who flocked to Cubao, Quezon City.

Hours before the group’s one-night performance, traffic choked major roads that led to the concert venue.

At exactly 9:25 in the evening, lights at the Big Dome dimmed, as the thrilled crowd braced themselves for a musical experience.

“Payphone,” the carrier single of the group’s fourth studio album Overexposed, switched on the audience’s enthusiasm.

It was followed up by the 2007 best-selling single on iTunes, “Makes Me Wonder,” its intro mashed with Michael Jackson’s “Don’t Stop 'Til You Get Enough.”

The crowd’s energy leveled up as Maroon 5 played their classics “Sunday Morning,” “Harder to Breathe,” and “This Love”—all selections from Songs About Jane, the album that launched their career in 2002.

Meanwhile, the intensity of the scene was kept high as the band performed more of their originals: “Never See Your Face Again,” “Won’t Go Home Without You,” “Lucky Strike,” “Wipe Your Eyes,” “One More Night,” also “Hands All Over.”

The mix of songs from the repertoire was recognized by the audience each time the band hit the keys to their intros.

During the encore, Maroon 5 rewarded its worthy audience with six more songs that included an acoustic version of “She Will Be Loved,” “Stereo Hearts,” a medley of “Don’t You Want Me” and Justine Timberlake’s “Sexy Back,” the White Stripe’s cover song “Seven Nation Army,” and “Daylight.”

For its finale, the group capped the show with Maroon 5’s biggest hit yet, 2011’s “Moves Like Jagger,” which they started off playfully mixing with the current Korean sensation “Gangnam Style.”

Towards the end, Levine expressed how through music “the world is much more connected now.”

The Filipinos, said the heartthrob vocalist, always “have so much love to give.”

In behalf of the band, Levine thanked the Manila audience as the band concluded the show with the resounding finals keys of their grand finale.