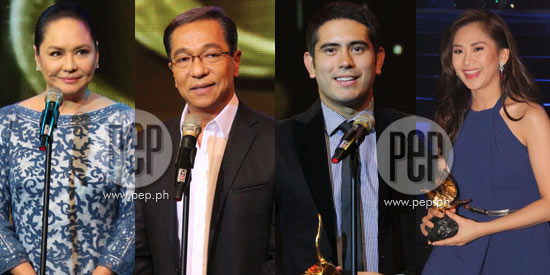 ABS-CBN executive Charo Santos-Concio and broadcaster Ted Failon were among the recipients of the highest honors given by the KBP.

The CEO and President of the Kapamilya Network fondly looked back at the days of her youth as she accepted the Lifetime Achievement Award. She quipped, "Ito pong award na ito ay patunay na nagkakaedad na 'ko."

She turned serious as she continued, "It is humbling to be part of the roster of the KBP Lifetime Achievement Awardees. I would like to thank Gabby Lopez and the hardworking men and women of ABS-CBN.

"I just wanted to be a good storyteller like my father and my job allows me to be one."

For his part, Ted Failon also looked back at his humble beginnings as a driver/reporter. "Ako ay naiyak dahil sa mga lumang pictures," referring to the slideshow of his vintage photos taken during his long career.

Child star Xyriel Manabat was one of the Kapamilya celebrities who attended that night. She accepted the trophy for Wansapanataym, which won the Best TV Children's Program.

Dyan Castillejo gave a speech when Sports Unlimited won for Best TV Sports Program. According to Dyan, her co-host Marc Nelson was unable to attend the awards night because he is covering the dragonboat competition in Boracay. As she ended her speech, she took a step backward and almost fell down because of the wooden steps onstage.

Sarah Geronimo personally accepted the award for Sarah G Live as Best TV Variety Program. In her acceptance speech, she admitted: "Hindi po naging madali ang pagbuo ng Sarah G Live. Makulay ang journey," she admitted, prompting her to pause as she was at a loss for words. "Personally, malaki ang natulong ng show na ito sa akin as a person and as a girl who is now a woman," she said with her trademark giggle.

Towards the end of the ceremony, Gerald Anderson emerged from the right side of stage and waited near the stage wings.

Sarah was seated at the left side of the venue so the two did not cross paths. As soon as Sarah received her award, she immediately left the venue.

After Sarah received her trophy, the winner of the Best Actor for Drama Program was announced. Gerald Anderson received the said honor for his now-defunct series, Budoy.

ABS-CBN emerged as the Best TV Station in the 21st Golden Dove Awards. Since 2003, GMA Network has not been a member of the Kapisanan ng Brodkaster ng Pilipinas (KBP), which hands out the said awards.

DZMM, the flagship AM station of ABS-CBN, bagged the trophy for Best AM Radio Station. The Best FM Radio Station award went to Monster Radio RX93.1.

G Tongi and Atom Araullo served as the hosts of the awards night.

Here is the list of winners of the 21st Golden Dove Awards: