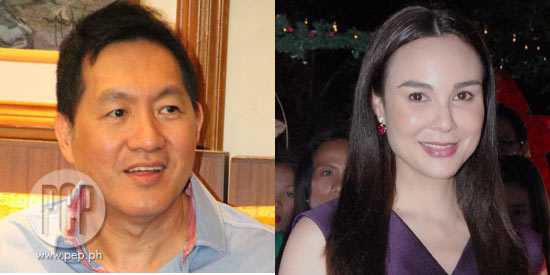 Former Seiko producer Robbie Tan thinks it’s a pity that his former star Gretchen Barretto is in the middle of a family feud these days.

In the '80s, Robbie produced many films starring Gretchen Barretto, whom he describes as "very intelligent, conscientious, at very devoted sa kanyang career.”

During the 30-minute interview, Robbie repeatedly describes Gretchen as a hardworking girl who worked for her family.

He also reveals that Gretchen asked him to help boost the careers of her sisters Claudine and Marjorie before they became major stars.

Robbie recalls how he met Gretchen.

What made Robbie accept her in Seiko?

He also describes Gretchen as quite devoted to her family.

CASH ADVANCES. There are currently two versions about the financial state of the Barrettos during the '80s.

Elder brother Jay-Jay says that he and Gretchen had to survive on a 100-peso daily allowance given to Gretchen—P50 for the gas, P50 for the hamburger and Coke.

On the other hand, sister Gia says that their father provided them with a luxurious lifestyle—with carpeted, air-conditioned rooms, chauffer-driven cars, and country-club memberships.

Asked about Gretchen's finances during her Seiko days, Robbie recounts that, even while Gretchen had a regular income, there were still instances when she needed to make cash advances.

He narrates, "Sasabihin niya, 'Tito, can I make bale?'

During the '80s, Gretchen was a woman with simple needs, the producer recalls. "Simple lang naman siya at that time. Wala naman siyang mga luho.

GRETCHEN THE WORKER. As a producer, Robbie worked with Gretchen for four years. What were Gretchen’s work habits at Seiko Films?

He reveals that even National Artist for Film Lino Brocka liked working with Gretchen.

He recalls that the only times Gretchen would ask for a reprieve from work were when she was affected by her lovelife.

Does he recall how heavy Gretchen's workload was? How often did she tape in a week?

Robbie describes how Gretchen chose her projects in the past.

"Kinukumbinse ko siya. You have to convince her why she has to do it.

BOOSTING CLAUDINE AND MARJORIE'S CAREERS. The top honcho of Seiko Films also recalls that Gretchen did her best to help boost the careers of her sisters Claudine and Marjorie.

"In fact, I was the one na kinuha si Claudine as contract star."

Aside from helping boost the career of Claudine, he also recalls Gretchen asking him if he could give work to Marjorie as well.

ADVICE FOR GRETCHEN. Now that Gretchen is embroiled in a family feud, Robbie has been talking with the former Seiko star.

"Sabi ko sa kanya, ‘You're not perfect at may mga nasagasaan ka rin. Aminin mo na lang and try to mend ways with your mother.’

ADVICE FOR INDAY. Last April 24, showbiz denizens were stunned by a letter released by Estrella “Inday” Barretto to the press. In it, she defended her youngest daughter Claudine while calling her fifth daughter Gretchen a "liar."

For his part, Robbie offers advice for the matriarch of the Barretto family.