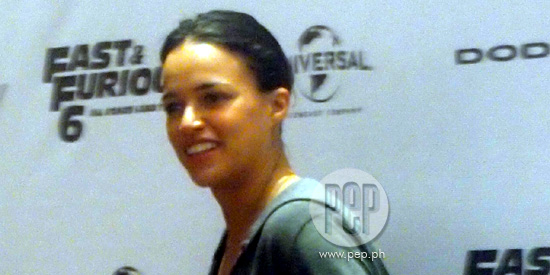 Fast & Furious 6 star Michelle Rodriguez reveals details about three scripts that she is currently working on.

For Hollywood actress Michelle Rodriguez, her next move is to take a career path that she has wanted to do for the past 13 years: become a writer.

When PEP.ph (Philippine Entertainment Portal) asked Michelle to give details about her upcoming writing projects, she revealed that she is working on one about drugs titled Sedated; one set during the 1400s titled Matriarch Society; and a kid-oriented movie titled Kingdom Come.

The Fast & Furious 6 star met with select members of the press yesterday, May 16, at Fairmont Hotel in Makati to talk about her dream of becoming a writer.

In real life, is she as intense as her characters onscreen?

“Yeah, I would hope so,” she said with a laugh.

“Not as crazy as Letty but for sure, definitely. I have passion behind everything I do.”

Her character Letty is a mechanic in Fast & Furious who is the girlfriend of lead character Dom Toretto (played by Vin Diesel).

Is she happy with the way her character, Letty, was written in Fast &

Furious?“What you see on that screen, for me, it was never what was on paper. Just remember that.

“I always, always have to change. There are only two projects that I never had to change the writing: Girl Fight and Avatar.”

Is she open to starring in a romantic comedy in the future?

“I would love to do that. I’m always leaving it open. It’s just that the writing…” said Michelle with a sigh.

“It’s so hard to find really good writers. It’s a fairly new, last-twenty-year thing to have strong, independent, free-spirited women on film,” said the actress, who has portrayed tough chick characters in movies such as Fast & Furious, Avatar, and Resident Evil.

She said with a hint of frustration: “Eighty percent of the writers are guys, most of them are married in Beverly Hills and they’re married to some woman who obviously annoys them or they wouldn’t write the way they write.

“It’s just a matter of just getting more female writers in the business, which is my next move.”

MICHELLE THE WRITER. Michelle admitted that she had to take time to mature before she finally pursued her dream of becoming a writer.

She admitted: “I got into this business to write. If anything, I’ve been lazy.

“For the last 13 years, I haven’t been focused because I was too busy growing up. For a person like me, it takes a long time,” she said with her signature laugh.

Michelle added, “It’s kinda like fruit. You wait and wait and wait the all of sudden, [you realize], ‘Wow! She’s growing up! She’s responsible. She’s more intelligent now.’

Does she already have specific writing projects in mind?

The 34-year-old actress tackles a wide variety of subjects in the scripts that she is working on.

“The other one is Matriarch Society. It’s about a secret society of women who have been around since the 1400s.

“In today’s day and age, it’s like Confessions of an Economic Hitman meets Double 007. I’m just finding a great excuse to bring actresses together in one movie: old and young. So that was my solution.

“The other one is Kingdom Come, which is a kid’s movie. It’s about the depletion of the planet and all the animals in the planet are attacking anything that’s not pure. That’s kinda crazy.”