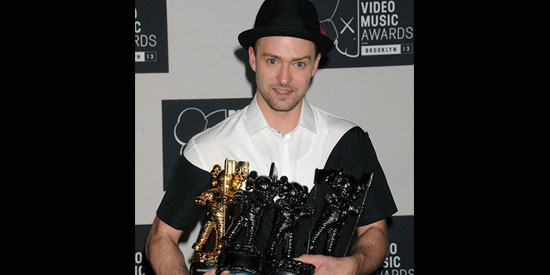 The 32-year-old singer—who returned to music this year after taking a hiatus to focus on his acting career—celebrated the success of his comeback as he took home four statues at the music awards ceremony, including the Video of the Year prize for "Mirrors" and a lifetime achievement gong titled the Michael Jackson Video Vanguard Award.

Justin also picked up gongs for Best Direction for "Suit & Tie" and Best Editing for "Mirrors."

The singing sensation—who is married to actress Jessica Biel—paid homage to his career by performing a medley of his biggest hits including "Cry Me A River" and "SexyBack," but the icing on the cake was a reunion with his former boy band, *NSYNC.

The "Mirrors" hitmaker later paid tribute to his former group as he accepted the Michael Jackson Video Vanguard Award.

He said: "Half of the Moonmen I ever won, I won with those four guys... I'm going to share this with them."

Performances on the night came from Lady Gaga (who opened the show with the first live performance of her new song "Applause"), Robin Thicke, Miley Cyrus, Kanye West, and Katy Perry—who closed the ceremony by giving a rousing rendition of her new single "Roar" under the Brooklyn Bridge in New York City.

Best Female Video: Taylor Swift, "I Knew You Were Trouble"

Best Pop Video: Selena Gomez, "Come and Get It"

Best Rock Video: Thirty Seconds to Mars, "Up in the Air"

Song of the Summer: One Direction, "Best Song Ever"

Artist to Watch: Austin Mahone: "What About Love"