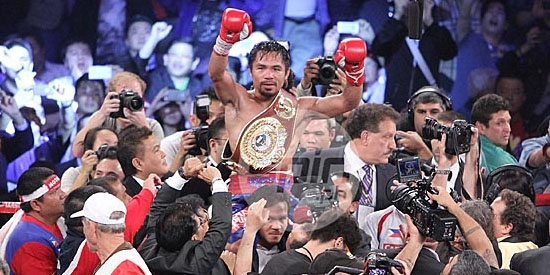 In a ring-side interview, the WBO international welterweight champion says Rios was "much slower" but it was not that "easy" to beat him.

"I don't want to get caught in the last round. It is hard. Let's give credit to them.

"Rios is a good fighter and a good opponent."

Manny also dedicates his victory to the victims of super typhoon Yolanda:

"After the fight, we are all brothers and sisters."

"Thank you to all the fans, who came here tonight and witnessed a good fight.

"My time is not over.

"This fight is for all the people affected by the typhoon."

After the Rios bout, Pacman (his moniker) will head to Tacloban City, one of the hardest-hit areas during Yolanda onslaught.

Next year, two fights are being lined up for Manny, but as to who will be his next opponent, the Pinoy boxing champ says, "I don't have an idea. In depends on my promoter Bob Arum."

Meanwhile, Rios doesn't look happy when the interviewer likenes him to a punching bag, given his marked and swolllen face.

"Do you think I'm a punching bag?

"Manny Pacquiao is very fast. He's fast, very awkward. His speed got me a little bit."