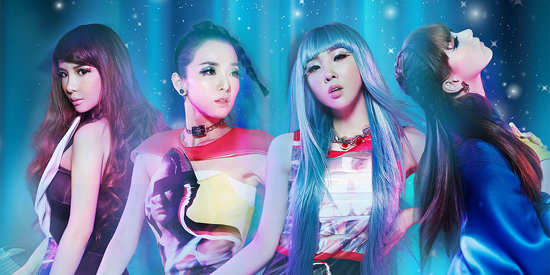 YG Entertainment has released the teaser photos of 2NE1's upcoming 2nd World Tour, All Or Nothing. 2NE1 will kick-off their concert on March 1 and 2 at the Olympic Park SK Handball Stadium in Seoul, South Korea.

More than 13,000 fans voted for their favorite K-pop girl group in a survey posted on the channel’s official Facebook page with 15 girl groups to choose from.

YG Entertainment’s hip-hop quartet 2NE1 topped the survey with 30% percent of the votes.

The group is currently preparing for their All or Nothing: 2NE1 2nd World Tour and 2014 comeback in the Korean music scene.

Their concert in the Philippines is slated to happen on May 17, which also marks the 5thanniversary of the group.

Read: Sandara Park and 2NE1 to make a comeback in Manila after two years

Girls’ Generation is one of South Korea’s top girl groups having a huge following all over the world.

They also received the Music Video of the Year award for the same song during the 2013 YouTube Music Awards.

JYP Entertainment’s Miss A follows closely with 8%, and Core Contents Media’s T-Ara is on its tail with 6%.

The show took note of Sandara’s youthful beauty despite the fact that she’s turning 30 years old this year.

More than 26,000 fans voted at the show's Most Beautiful Girl Group Member survey.

Sandara is followed by Girls’ Generations YoonA in 2nd place with 25%.

Miss A’s Suzy garnered 9%, while A Pink’s So Na Eun got 5%, earning the 4th and 5th place, respectively.