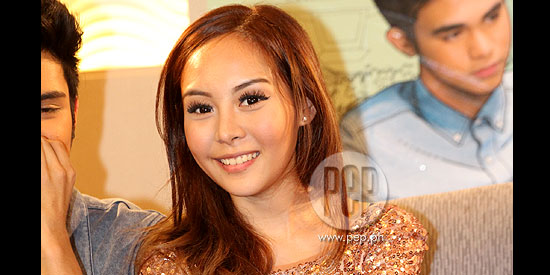 Ericka Villongco on breakup with James Reid: "It’s hard, kasi every day in social media, I see his name all over, that's what makes it hard. I wish that we had that closure. I wish we were able to talk. I wish I was also able to say my side of the story."

“Nung nag-break kami last March, officially, it was hard having a lot of bashers and keeping quiet of our relationship, because I did not want to interfere with his movie.

“At the same time, I wish I was there for him.”

“Three and a half years kami. We were very in love.

“Even though it wasn’t onscreen or anything, but a lot of people love us together.”

“Siyempre, I get very emotional when I talk about it.

“I love him, our love was one of a kind… I cannot explain.

“We spent almost every day together. I can’t explain love.”

Sagot ni Ericka, “It’s been almost been five months, I can say I’m much happier now.

“The only regret is that I wish that we were able to end civilly or like friends.

“It’s hard, kasi every day in social media, I see his name all over, that's what makes it hard.

“I wish that we had that closure. I wish we were able to talk. I wish I was also able to say my side of the story.

“Kasi this is the first time I’m telling my side.

“We can’t never unlove a person, that’s what I believe.

Sabi niya, “We were supposed to talk after his movie, but hindi natuloy.

“Parang umiwas din kami sa isa’t isa kasi it would be harder for both of us.

“Friends? Maybe in the future.

“I bumped in to him few times pero deadma lang.

“We have common friends, but wala, we don’t really mind each other.

“We just look at each other and that’s it.”

“Siyempre, at first, very emotional, but I accepted it because I know he’s doing it not for himself, but he’s doing it for his family.

“He’s doing it for his family, for his dad.”

“Kasi si Nadine, right after ng breakup namin [ni James], we talked through Twitter DM [direct messaging] pa, ‘tapos she consoled me and she told me, ‘I’m here for you,’ ayun.

“She was very nice, very down to earth.

“Honestly, I wouldn’t mind if it will be Nadine.

“Kasi, when I met her, she’s very warm, she was down to earth, just like James.

“Kung gusto niya at gusto ni James, then it’s up to them.”

Saad niya, “Pinag-usapan namin for the longest time, kasi I was trying to be there for him when he was filming Diary Ng Panget, then it got very hectic yung schedule niya, and then naging busy siya.

“Siyempre kasi, like in this movie I played, psycho girlfriend, in a way, I wouldn’t say I was psycho, but I became very clingy because of what I’m used to.

“I would spend time with him every day...”

Sabi niya, “Hindi naman bad breakup na nagsigawan kami, but it was not good in a way na sana we were happy.

“We had this fantasy where we just want to end things good, so in the end, we can save it.

“I know what he tells the press also, which is the truth.

“James is very honest, he never lies, he’s very down to earth.

“It’s very personal, but James and I always had this fantasy to ourselves that in the future, we will still end up together.

"I would say he’s my soulmate, maybe he thinks the same of me, but that’s why he wanted to save it.

“It came from him that he wanted to save our relationship.”