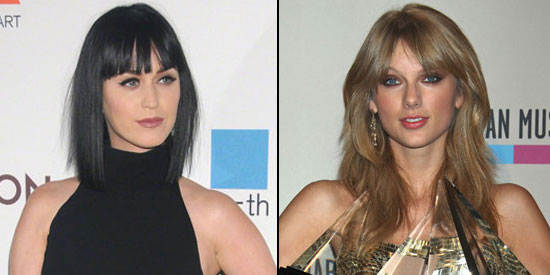 Katy Perry (left) thinks Taylor Swift (right) is the music industry's "sweetheart" and says being famous is like being on a soap opera.

The "Dark Horse" hitmaker, who is rumored to be embroiled in a bitter feud with the 24-year-old singer, says being famous is like being on a soap opera and hinted she doesn't think the "Black Space" singer is perfect in real life.

She said: "You've got to name someone the villain, someone the princess, someone's the mom [and] the dad type—you know there always have to be characters.

"As pop figures, we're all characters. And the media uses that.

"Who is the sweetheart, who is the villain? You know.

"Taylor's the sweetheart. Kanye [West]'s the villain. That's the narrative."

The duo reportedly fell out last year when Taylor revealed one of her tracks "Bad Blood" was written about another famous singer, calling her a "straight-up enemy."

While she didn't name Katy, the "Roar" hitmaker fuelled rumors the comments were about her when she tweeted the next day: "Watch out for the Regina George in sheep's clothing," referencing a character from the film Mean Girls.

Asked about the tension between them recently, Katy would only say: "If somebody is trying to defame my character, you're going to hear about it."

Meanwhile, the 30-year-old star admits being a pop star is a lot harder than she dreamed it would be and she isn't surprised Britney Spears shaved her head during her breakdown in 2007.

She told the March issue of Elle magazine: "It is a hundred times harder a dream than the dream that I dreamt when I was nine.

"You think you signed up for one thing, but you automatically sign up for a hundred others.

"And that is why you see people shaving their f**king heads."