Kris Aquino stands by brother PNoy amidst criticisms against him 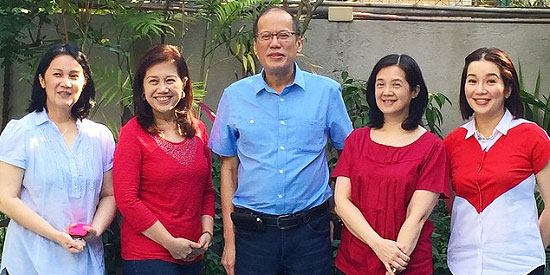 During the February 12 episode of Aquino and Abunda Tonight, Kris Aquino stated that her mom, the late President Corazon Aquino, must have been proud of the way she and her siblings have stuck together amidst the barrage of intrigues being hurled against PNoy. Seen in photo [L-R]: A private get-together of the Aquino siblings Ballsy Cruz, Pinky Abellada, PNoy, Viel Dee, and Kris Aquino last Sunday, February 8.

Kris Aquino expressed her unwavering support to her brother, President Benigno “Noynoy” Aquino III, amidst the barrage of criticisms being hurled against him.

Kris, on the other hand, never failed to defend PNoy against his critics ever since he failed to attend the arrival honors for the slain PNP-SAF commandos last January 29.

She got so affected by the negative feedback against her brother that she even went so far as unfollowing some of her fellow celebrities on Instagram at one point.

In the February 12 episode of Aquino and Abunda Tonight, the Queen of All Media stated once again that she and her siblings remain strong despite the problems that PNoy is currently dealing with.

“I just want to say thank you to my siblings.

“We've proven, I think, to each other yung binilin ng mom [the late President Corazon Aquino] na, ‘Come what may, be there for each other. Huwag niyo pababayaan ang isa't isa.’

"And ang pinaka-proud ako siguro, I have grown not only to love each of you more but to respect you more and to wish to be like you even more,” she stated.

“Certainly, this was all part of the discharge by the President of his functions as commander-in-chief of the Armed Forces.

“I am naming President Aquino because I don't think it serves public interest to fudge the issue—to never mention his name as if he were some sacred cow.

“I don't think he needs my protection. He can stand for himself,” Senator Santiago reiterated in a press briefing after the Senate hearing.