James Younghusband open to star in Wattpad series; says, “But we love football so much.” 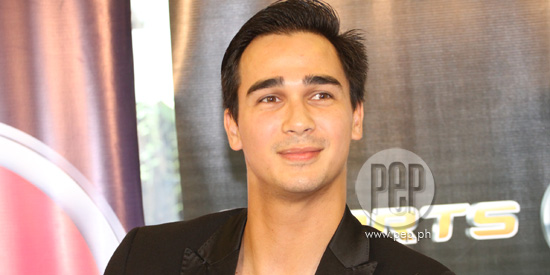 “I'm open to it. We can't play football forever... We really wanna look for other opportunities, but we love football so much,” says James Younghusband when asked if he could also star in an episode of Wattpad series on TV5.

James Younghusband is grateful for being recognized as a prime football player in the country.

However, he does not want to think about getting famous for doing the sports he loves.

At the recent press conference of his new show with brother Phil on TV5, YH Tube, the eldest Younghusband still put football on spotlight instead of him.

“I'm always happy that people recognize us as footballers.

"It's always great to hear people say 'Congrats on your game' or 'Well done on your game.'

“It makes us really feel good that something we enjoy is something we teach around younger kids and people recognize us,” James told entertainment reporters when asked if he already feels popular among Pinoys.

To avoid getting it into his head, James acknowledges his family and friends who always remind him to stay grounded.

“Friends and family always remind us to always be humble, don't be mayabang.

“We just enjoy what we're doing.

Meanwhile, James admitted that he and his brother do not see themselves playing football forever.

When asked if they're also willing to try acting, James laughed a bit and said, “I'm open to it. We can't play football forever.”

The Azkals football player also added, “But we always said that if we're done playing football, we'll go into coaching.

“We really wanna look for other opportunities, but we love football so much.”

BEING A PARENT. After their mom passed away in 2011, James and Phil took her place and served as parents to their youngest sister, Keri.

As of now, the Younghusbands are getting used to being guardians to their little sister.

“She's getting bigger now,” James happily related to the press.

“She's into teenage years so it's a bit stressful for the moment.

“What's also good is that we actually want to be always positive like how our mom and dad are like.

“I don't want to brag but they always told us that family comes first and be more responsible.

“And she pretty tests us, our little sister. But when we're together, we're very happy.”

When asked what kind of challenges they get from being “parents” to Keri, James smiled and said, “Telling us her boy crushes!”

He added, “She always say she really wants to become an actress and a singer.

James and Phil try their best to be very supportive of their sister.

James said, “We're excited for her.

"Our mom and dad have always been supportive of me and my brother when we wanted to become football players.

“So, we also want to be supportive of her fulfilling her dreams.”

SETTLING DOWN. Meanwhile, James especially mentioned his girlfriend of four years for being very helpful in dealing with Keri.

While their relationship still getting stronger, James said they haven't thought of settling down yet.

Right now, they're both prioritizing their own careers.

“Football and Keri are the priorities at the moment.

“Once we're really happy with what happened to our careers, we'll be looking at settling down.”

He assured, however, that nothing will change if ever he and his girlfriend have decided to build their own family.

“We'll, I think Keri, for one, she'll get more freedom that way.”