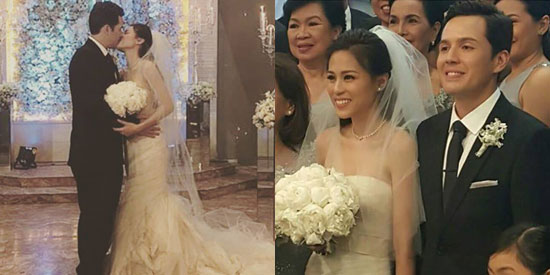 Toni Gonzaga quotes a biblical passage from Matthew 19:6 to describe her wedding day with Paul Soriano: “So they are no longer two but one flesh. Therefore what God has joined together, let no one separate."

Today marks not only their eight year anniversary as a couple, but the day that Paul Soriano and Toni Gonzaga (a.k.a Celestine Gonzaga) become husband and wife.

At around 4:30 this afternoon, Paul Soriano and Toni Gonzaga sealed their vows with a kiss.

“So they are no longer two but one flesh. Therefore what God has joined together, let no one separate,” as Toni aptly puts it, quoting a biblical passage in one of their pre-nup photos posted on Instagram.

Taytay being the hometown of the Gonzagas, Toni said that she has always dreamed of getting married in the place where she grew up and started weaving dreams about entering showbiz.

With a “traditional, simple, and clean” wedding motif in mind, Toni has opted for different shades of white based on the floral arrangement by Gideon Hermosa.

White has different shades:) Another #Gideonized wedding will be coming up soon:) #Excited #Blessed #TheMostAnticipatedWeddingOfTheYear #PerfectTogether

Toni, 31, and Paul, 33, actually kept most of the wedding details under wraps, but their avid supporters have been all atwitter as they share tidbits about the couple's Christian wedding ceremony today.

Alex Gonzaga, who tagged herself as "the best maid of honor," was dressed in a beautiful Rajo Laurel long-sleeved gown.

The wedding ceremony was followed by the reception around 6:00 p.m. at Rockwell Tent in Makati City.

Then during the reception, it was Toni's turn to get emotional as she danced with her father Vice-Mayor Carlito Gonzaga, whom she fondly calls Daddy Bonoy.

Toni once said that she knew that Paul is "The One" when he "honored" her parents' strict yet loving guidance towards the TV host/actress/singer.

TRUE LOVE WAITS. Toni and Paul set the bar high for those who are dreaming of a happily ever after like theirs.

That it’s not really about making the grand gesture, but the love, patience, and sincere intention that Paul had shown towards Toni for the past eight years of their relationship.

To recall, Toni tearfully admitted in The Buzz’s February episode how Paul let her chase her dreams even if it means coming in last in her list of priorities.

“When he was going to propose sa akin, iyak ako nang iyak kasi nag-flashback sa akin lahat since day one.

“I remember there are times na he would ask me, ‘For the past seven years, Tin, I was never a priority in your life.

“’It has always been God, your family, your work, and me. I’m always the third and I’ve accepted that for seven years.’

“Pero he really stayed and he proved to me that true love waits.”

Paul proposed to Toni in front of her parents and younger sister Alex Gonzaga around past midnight of January 21.

THE LOVE STORY. Truth be told, Paul had a crush on Toni way before they first met in Gary Valenciano’s concert at the Music Museum in October 2006.

In an interview with PEP last February, Gary recalled that Paul confided to his wife Angeli Pangilinan, who thought of inviting Toni to the concert.

“And Angeli said, ‘You know what, you wanna meet her? I can invite her to the concert.’

“Then, of course, I was like, ‘But, honey, if Toni comes to the concert, Paul might be directing away to meet her instead of directing the concert, which is me.’

“It came together. They met each other and the rest is history.”

Paul and Toni got to know each other for eight months until they officially became a couple in June 12, 2007.

The couple first confirmed that they’re in a relationship during the July 17 episode of the now-defunct Kapamilya morning talk show, Boy and Kris.

Asked if they’re officially a couple, Paul happily replied, “Yes, we are together.”

Even then, Toni knew that Paul is the one she had been waiting for all her life.

Asked what sets him apart from other guys, she easily answered, “He's an answered prayer.”

On that day, the couple didn’t give any promises to each other that they couldn’t keep.

But instead, they let God guide them through their journey to forever.

Toni, quoting from a biblical passage, told Paul: “I thank God for every remembrance of you.”

To which Paul replied quoting another biblical passage: “You will always be in my heart.”

To view a first look at photos of the wedding, CLICK HERE.