Caitlyn Jenner celebrates Father's Day with her children and stepchildren 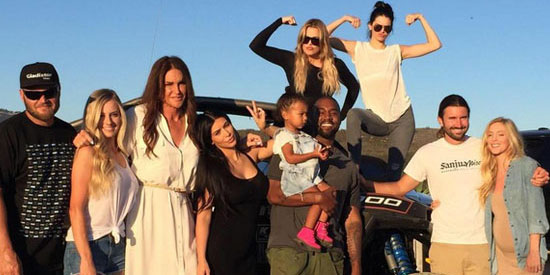 Caitlyn Jenner held a party at her Malibu home on Sunday, June 21, which was attended by most of her children, and was thrilled with the gifts she received from her kids and stepkids.

Caitlyn Jenner had her "best Father's Day ever" at the weekend.

The former Olympian—who was known as Bruce Jenner before her gender transition—held a party at her Malibu home on Sunday, June 21, which was attended by most of her children, and was thrilled with the gifts she received from her kids and stepkids.

According to TMZ, whereas Caitlyn has previously received ties or sports-related gifts for Father's Day, this year she was given dresses, shoes and accessories from Kim Kardashian (who attended the bash with husband Kanye West and two-year-old daughter North), Khloe Kardashian, Kourtney Kardashian, Kylie Jenner, and Kendall Jenner.

And her elder sons, Brandon and Burt Jenner helped out their parent by doing work in her garden so she wouldn't have to do it herself.

On Monday, June 22, Caitlyn shared a picture from her Father's Day celebrations—which were not attended by Kourtney, who was all, or Brody Jenner, who was working out of town—of herself and her family, who spent part of the day dune buggying.

She tweeted alongside the photo: "Great day yesterday for Father's Day. We had so much fun off-roading. So much love and support! Love my family!"

On the day, Caitlyn's fashion model daughter Kendall, 19, paid a moving tribute to her father on social media on the day.

She penned: "My whole life this soul was my daddy and just because your appearance is different now doesn't mean you were any less of a father to me my entire life.

"Happy Father's Day to the person who raised me, and taught me everything I know, my hero."

And 17-year-old sister Kylie uploaded an old picture of herself with Bruce and Kendall.

Using words from Caitlyn, she captioned the picture: "Happy Father's Day my little light of sunshine 'You can still call me dad, Kylie. No matter what I'm always going to be your father. That's never going to change.' "