David Foster on Charice's sexual preference: "She was struggling for so many years for an issue that shouldn’t be an issue." 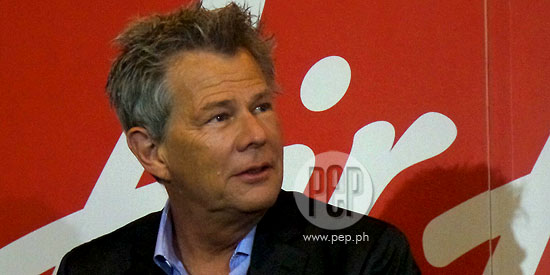 David Foster is waiting for Charice to settle her issues and is still willing to work with her in the future. He says, "She has some personal issues that she has to overcome and she’s trying to get over a decision. And when she does, we will work with her again because I believe in her."

At the launch of David Foster as AirAsia’s new brand ambassador, at Majestic Hotel in Kuala Lumpur, Malaysia, last August 12, the musical artist expressed his trust and admiration to Asian talents, including our very own Charice.

“There’s a lot of talents in Asia.

"If you’re gonna check the map, there’s a billion and a half Asian people here, and there’s gonna be some superstars here.

“We got very close with Charice from the Philippines.

"She has some personal issues that she has to overcome and she’s trying to get over a decision.

"And when she does, we will hit work her again because I believe in her," says David.

It can be recalled that in 2009, Oprah Winfrey referred Charice to David so he can mentor her.

Eventually, the Filipino singer's career flourished and opened doors for her in the international music scene.

DAVID ON CHARICE. When asked about Asian talents, David couldn’t help but mention how impressed he is with Charice.

He said that, at the moment, Charice is undergoing some personal problems and he can’t wait to work with her again.

“On Monday night [August 17], I am doing a concert in the Philippines and she’s singing with me.

"She sang at the finals of Asia’s Got Talent."

“When I say problems, you know, I mean it’s no big secret that she’s with a woman—and that’s just the way it is.”

He recalled how he witnessed how Charice struggled when they were on tour together for Hitman: David Foster and Friends.

“And she’s struggling a bit, and it’s painful to watch her on tour when she was struggling about it so badly.

“It should be something that’s just is and accepted.

"We’ve all seen Caitlyn Jenner and all this stuff that is coming out right now.

“But I felt so bad for her, she was struggling for so many years for an issue that shouldn’t be an issue.

"I think she’s coming with the terms of it and now she’s back in the business, and I hope I can be there to help her."