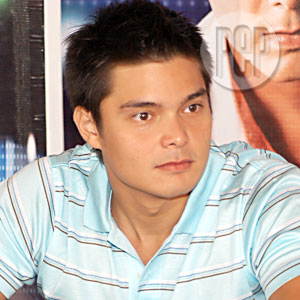 Young actor-director Dingdong Dantes was asked if he would ever venture into independent filmmaking.

“Yes!” he said, with conviction.


Right now, however, is not yet the time for going full-time as director. “The ambition will always be there. But now, concentrate muna sa acting. Wala din time,” Dingdong told PEP (Philippine Entertainment Portal) in an interview last November 29.

He had his directorial debut in the defunct horror series on GMA-7, Kakabakaba. Impressing management, he was named assistant director for Encantadia and Atlantika, where he also plays the lead character, Aquano.

In the local scene, his favorite directors are Mark Reyes for story telling skills, Gil Tejada for drama, Joel Lamangan for realism, and Dominic Zapata for youth-oriented projects. Zapata was Dingdong's director in the defunct GMA-7 series T.G.I.S., which was like a local Dawson's Creek.

PEP also asked the actor, who has been given leading-man roles and roles of heroes in period costumes, what his plans were as an actor.

Beginning with his current role as Aquano, he said: "Pag may binigay [na role], make the most out of it." He also said he wants to play other roles someday: an antagonist as opposed to his current roles of the protagonist; a retardate in a serious film; a character in a comedy sitcoms.

Dingdong said he has not set any deadlines to how long he would stay in the entertainment industry. “Walang time. Mahirap mag-predict sa industriya. As long as people like you. Ganun ako dati, kung di ka gusto, di ibig sabihin na titigil ka na. This is my craft. Papatuloy ko 'to dahil gusto ko gawin.”

He made special mention of Eddie Garcia, an actor admired for both his talent and his long career in Philippine entertainment. “Lahat ng artista, nag-aspire to be Eddie Garcia," the young actor said. He added that he wouldn't mind having a long career himself.

When asked what movie will he watch in the coming Metro Manila Film Festival, he mentioned ZsaZsa Zaturnnah, Ligalig, and Matakot Ka Sa Karma.

Dingdong is also a favorite television host, having been the presentor in all three previous seasons of StarStruck, the hit GMA-7 reality-based talent search. He will again co-host this year’s edition of StarStruck—dubbed the Next Level—with Jolina Magdangal and Raymond Gutierrez.