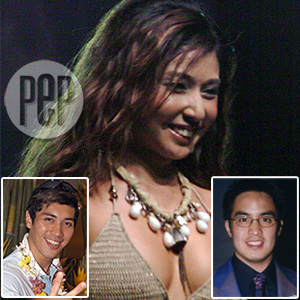 "Have you ever slept with anyone famous?" Mo Twister asked his celebrity guest Sheree in the "Forbidden Questions" segment of his radio show Good Times earlier today, April 25. The Skin City star scored 27 out of 40.

Sheree answered, "Yes, one lang. I only had one boyfriend." The Viva Hot Babe was referring to ex-boyfriend Onemig Bondoc.

Mo and his co-hosts, Mojo Jojo and Maui Taylor, said they thought Sheree was lying.

In another question, Mo asked Sheree if she was really going out with Philippine Idol runner-up and SOP mainstay Gian Magdangal.

Mo proceeded to tell the sexy star that a caller revealed that Gian only has a three-inch "wang." (Wang is a term the show uses to mean a man's private part).

Mo argued that if Sheree knew the size of Gian's "wang," then she must be lying when she said that she had only slept with one famous person.

Sheree named Onemig as one of the famous men she'd slept with, but refused to give the two other names. She also refused to confirm whether she had sexual relations with Gian or not.

"Who's better in bed, Onemig or Gian?" probed Mo further.

Sheree agreed to make out with fellow Viva Hot Babe Maui, but tapped out when asked to show her "puppies" (her boobs) to the hosts. Here are Sheree's answers to the other questions:

Plastic surgery. Mo asked Sheree whom she thought had plastic surgery done but hasn't admitted to it yet. "I don't know, but I think she admitted it already... Claudine Barretto—her boobs. I just heard so I can't tell if it's true or not. I really like her a lot [though]," answered Sheree.

Closet Queen. She said, "He's my crush though, Paolo Ballesteros. Actually, I can't tell [if a person is gay or not], but someone told me [that he is]."

Dislikes working with. "Aubrey Miles," she said bluntly. The two have a long-standing tiff, which was caused by Sheree's revelation on The Buzz years ago that Aubrey already has a kid.

Hot Babes she dislikes. "Before, Jen Rosendahl. It's because, before, she's too young and immature. Now, she's more mature," said Sheree.

Sex Tape. "Yeah, I erased it already. [We used a] video camera," she revealed. She said she did the video with her ex-boyfriend.

Favorite position. "Me on top," she revealed.