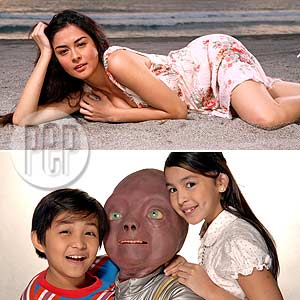 GMA-7's Marimar (top) was the number one show yesterday, August 16, according to the overnight rating conducted by AGB Nielsen Philippines among Mega Manila households. Kokey (bottom), on the other hand, dominates its timeslot to be the number one show on ABS-CBN.


Entering its first week, GMA-7's Marimar bolstered its grip on the primetime top spot with a strong 34.9 percent showing yesterday, August 16, while Kris Aquino's Deal or No Deal of ABS-CBN) registered a 25.8 percent rating. This is according to the overnight rating conducted by AGB Nielsen Philippines among Mega Manila households.

Many experts feel that it is still too early to predict whether there would be a dominant trend in favor of Marimar. But they agree that having a fresh face in the person of Marian plays a huge factor in keeping the viewers interested and tuned in every night.

Meanwhile, ABS-CBN's fantaserye Kokey maintained its strong showing against GMA-7's Mga Mata ni Anghelita in its timeslot as it posted a 33.6 percent rating, compared to the 31.3 percent posted by its counterpart. The suspension of classes due to typhoon Egay may have been a major factor in shoring up Kokey's performance as children stayed glued to their television sets.

The country's long-running noontime show Eat Bulaga! (GMA-7), on the other hand, affirmed it dominance as indicated by its 24.4 percent ratings against unpredictable rival, Wowowee's (ABS-CBN) 19.8 percent.

Interestingly, Meteor Garden (GMA-7) gave its former home network a dose of its own medicine by smothering Kapamilya Network's Margarita with a whooping ten-point margin, 24.1 percent against the latter's 14.1 percent. Clearly, F4 fever, albeit much tempered, still has that distinct pull on the viewer's heartstrings.

Richard Gutierrez's Lupin (GMA-7), which is on its final stretch, tallied a solid 32.9 percent rating. Its counterpart, Judy Ann Santos's Ysabella on ABS-CBN, in the meantime, collected a mark of 29 percent.