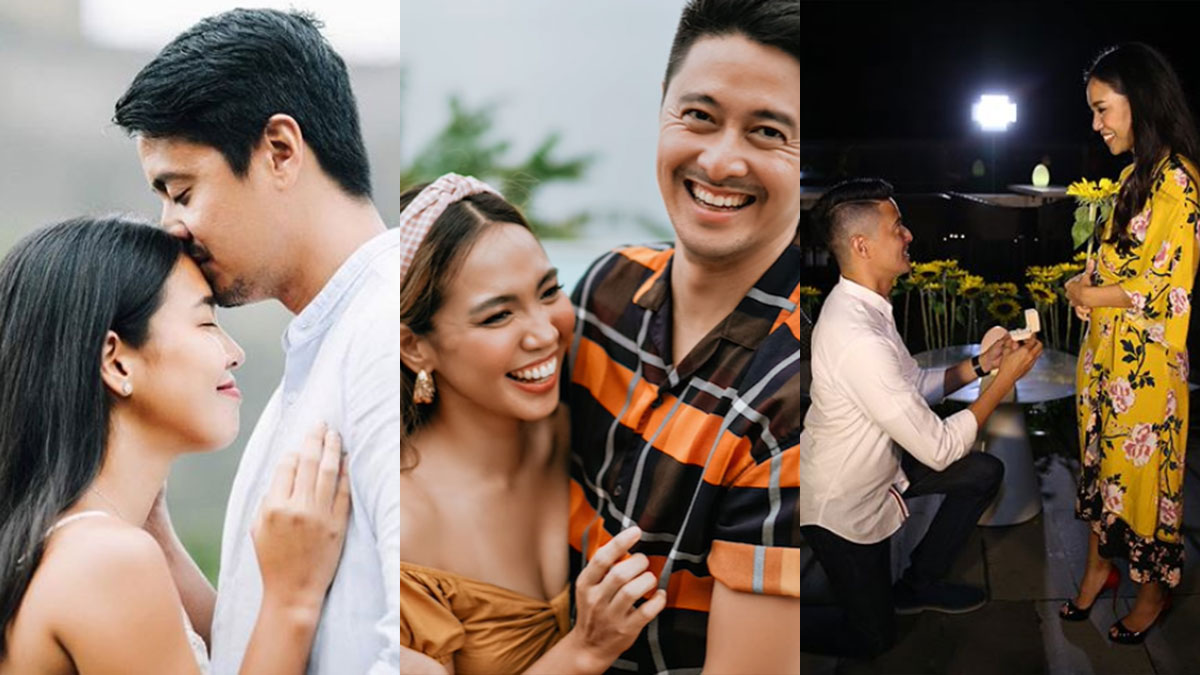 Aicelle Santos said her fiancé Mark Zambrano was not just an answered prayer, but he also passed the checklist of all the things she’s looking for in a man.

Their love story started in the summer of 2016, when Mark, who was then a news man in GMA-7, took a chance to get the attention of the Kapuso singer-actress by sending her a direct message on Instagram.

A month had passed before Aicelle got to read his message. She happened to be scrolling through her inbox to personally reply to fans congratulating her for her newly-released record album, Liwanag.

Aicelle recalled, “Sabi niya, ‘Hi, I’m a big fan of yours. Hope to see you around the network.’

“Casual lang reply ko, ‘Yeah, thank you. Hope to see you around, too.’ With no malice.”

Mark, however, has always been attracted to Aicelle.

“Yes, La Diva days pa niya yun," said Mark, referring to the vocal trio that was composed of Aicelle, Maricris Garcia, and Jonalyn Viray. All three were mainstays of the Kapuso musical-variety show SOP from 2009 to 2013.

The couple was interviewed when they sat down for PEP Live at the headquarters of PEP.ph (Philippine Entertainment Portal) last October 21.

It was a segment in the Kapuso noontime show where Aicelle randomly performs a song in the midst of heavy traffic around the metro.

MARK ASKS AICELLE OUT ON A DATE

So when Aicelle replied to Mark’s direct message on Instagram, he didn't think twice about making the moves on her.

His next message to Aicelle read: “Can I ask you out on a date?”

Aicelle admittedly had doubts about going out on a date with a guy she hasn’t even met yet.

But when she fished info about him from a fellow GMA-7 colleague, Aicelle learned that he’s "single" and "mabait naman daw."

She was also convinced by that same colleague to "stop assuming" and just say yes to meeting Mark as he might just want to be friends.

Aicelle and Mark's date night, however, proved to be a turning point in their lives.

Imagine how they've been working in the same company without ever crossing paths for years.

And then they unexpectedly find themselves sharing a meaningful connection that night they went to dinner that lasted for five hours.

"And me, coming from four years na single, there came to a point na ayaw ko na rin munang mag-relationship.

“And she was actually the first person who told me na, ‘Huy, wag kang nag-a-assume ng mga bagay-bagay.’”

After bringing her home, Mark found himself sitting in the car and thinking about their memorable date night.

He elaborated, “I’m a very cerebral person. I think a lot.

“That was amazing, yung night na yun. It was also an eye-opener for me.

"Dapat pala may ganun—just open yourself to life in general. Attract positivity.”

The very next day, Mark got in touch with Aicelle and started courting her.

Aicelle, for her part, felt that same inexplicable connection with Mark.

But she was admittedly guarding her heart well and didn't want another trial-and-error kind of relationship.

“So kapag may event na nangyayari sa buhay ko, ‘Lord, ano ba yung sign mo for me? Should I do this? Should I give this up?’

What was in her secret checklist?

Way before meeting Mark, Aicelle said she has already visualized her ideal boyfriend.

Aicelle found those things in Mark and more.

"So bago ko siya sinagot, I was really praying and praying."

HOW MARK KNEW AICELLE IS "THE ONE"

It was really perfect timing for both Mark and Aicelle.

Their courtship only took two weeks, but Mark was sure that Aicelle is "The One."

“I can only trust myself with that person and that person with myself kung nakikita ko na she can be, first of all, the wife and the mother of my kids in the future.

“Si Aicelle, she’s very mature dahil panganay din siya. She knows how to handle things regarding herself, her family.”

They were in sync, so to speak.

"It felt like a big sigh of relief and security and peace sa akin nung nangyari yun."

They were boyfriend-girlfriend for almost two years when Mark finally popped the question to Aicelle on March 7, 2018.

It happened 15 days before Aicelle flew to London for her stint on Miss Saigon UK Tour.

And yet Mark thought that being apart from Aicelle for a year was part of God’s plan.

“Sabi niya, ‘Mahal, you can do this. This is for you. It’s your time to grow as an artist, as a person—mag-isa ka, out of your comfort zone.’

TIME APART AND SURPRISE VISITS IN BETWEEN

They did go through some “adjustments” and challenges during the year they were apart.

But the waiting didn’t seem too long since Mark came to visit Aicelle when the Miss Saigon tour was held in Zurich, Switzerland and also in Plymouth, United Kingdom.

That visit in Plymouth was memorable for the couple since Mark arrived five days earlier than planned.

The Miss Saigon show just finished and most of the cast members were gathered outside the building when Aicelle came out bare-faced, wearing a simple sleeveless top and jogging pants.

She seemed surprised that her colleagues were still there when Mark came out in hiding and approached her with her favorite sunflowers in hand.

It was a sweet surprise that made Aicelle cry, as seen in the video that was uploaded in their joint YouTube channel.

When the run for Miss Saigon UK Tour concluded in March 2019, Aicelle came home to Manila and was cast in several acclaimed musical plays including Rak of Aegis Season 7 (July to August) and Himala: Isang Musikal (September to October).

Mark, for his part, left GMA-7 after eight years of being part of GMA News Team and transferred to ESPN 5 where he is regularly seen as a sports broadcaster.

With only a few weeks left before their wedding, Aicelle said she has cleared up her schedule to focus on preparation for the big day.

What can they promise each other as soon-to-be-married couple?

To which Mark replied, “I’m sure it will be happy.”

Then Mark added sweetly, “I’ll try to take care of you the way you deserve to be taken care of.

"Hindi ko puwede sabihin I’ll be the perfect husband, but I’ll try to be."