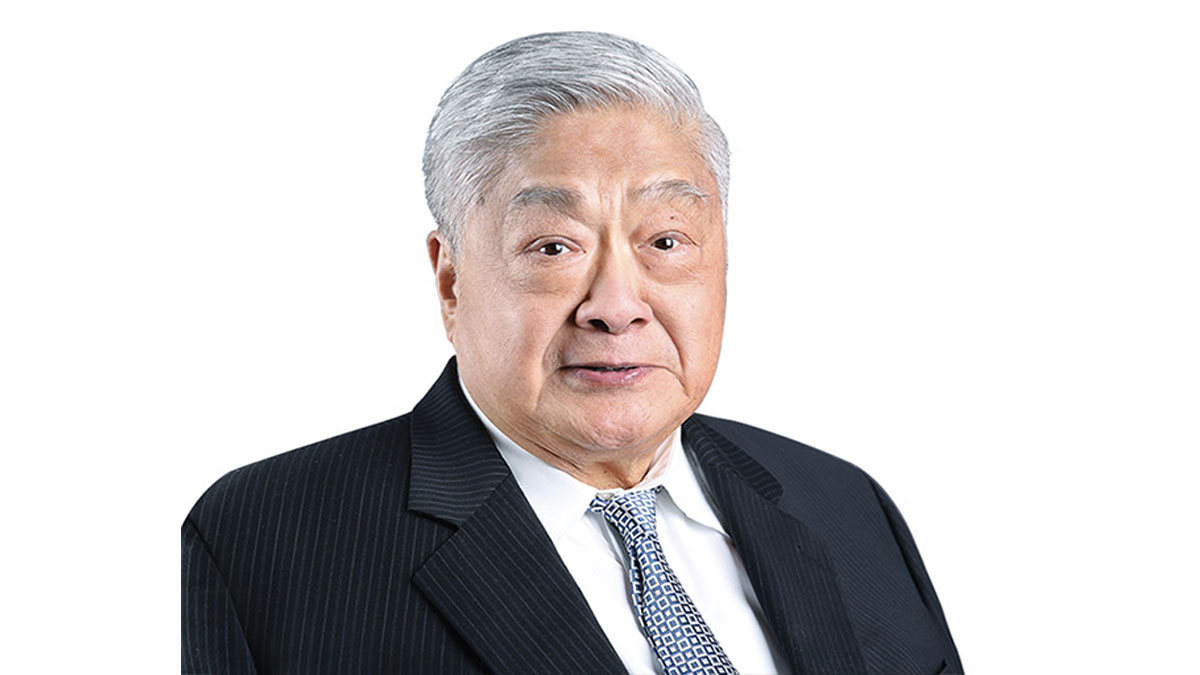 John Gokongwei Jr. passed away on November 9, 2019, at the Manila Doctor's Hospital surrounded by his loved ones. He is 93 years old.
PHOTO/S: jgsummit.com.ph

Entrepreneur and industrialist, businessman and philanthropist John L. Gokongwei Jr. has passed away November 9, 2019, at the age of 93.

"Our beloved husband, father and grandfather John Gokongwei, Jr. passed away peacefully 11:41 p.m., November 9th, at the Manila Doctor's Hospital surrounded by his loved ones. Please pray for the repose of his soul. Details of his wake to follow. Rest In Peace, Mr. John."

John L. Gokongwei Jr.: The man and his legacy

From helping put food on the table to presenting a wide array of lifestyle choices, including affordable and reliable air transportation options, Gokongwei Jr. devoted much of his career to making the lives of Filipinos better.

Gokongwei Jr. founded JG Summit Holdings Inc., one of the country’s biggest and most highly diversified business conglomerates in the country today.

The nation mourns the passing of Gokongwei Jr., whose life has been hailed as one of the most iconic stories of business successes—how a poor boy rose to the very top through entrepreneurship, hard work, creativity, and passion. He has served as a role model for the many aspiring entrepreneurs in the country.

At the age of 13, Gokongwei Jr. started selling garlic-cooked peanuts to his schoolmates. From that starting point, the self-made industrialist went on to build a diversified, multi-billion-peso business empire consisting of companies that are major players in their respective industries.

Mr. John, as he was fondly called, built JG Summit and Robinsons Retail Holdings, currently among the Philippines’ largest family-run conglomerates from a modest trading business into one of the biggest companies with interests in air transportation, telecommunications, banking, food, power, property and hospitality, retail, media, and petrochemicals.

Gokongwei, Jr. was called an “industrialist challenger” and a “disruptor” primarily because he was never afraid to venture into highly competitive fields or dip into untested waters. He was hailed for challenging the market Goliaths in very high-capital industries: airline, telecoms, and power and petrochemicals.

In 1956, he founded Universal Robina Corporation (URC), which first started as a corn starch manufacturer. Later, he introduced the coffee brand Blend 45, the first locally-manufactured instant coffee blend. He introduced poultry and later hog products and animal feeds from his own Robina Farms, even as URC dominated the savory snack market with its pioneering Jack N’ Jill brand products, which have been loved by generations of Filipinos.

In 1990, Gokongwei Jr. built Robinsons Galleria at the corner of EDSA and Ortigas, the site of the EDSA Revolution, and donated part of the land where the EDSA Shrine now sits. The success of Galleria led to a chain of malls, supermarkets, and department stores nationwide, further expanding his consumer appeal to include lifestyle, entertainment, and dining options.

When Gokongwei Jr. launched Cebu Pacific Air in the early 1990s, he pioneered the budget airline model by focusing on operational efficiencies and breakthrough marketing. This helped change the game and revolutionized the way people travel, with budget friendly air fares and affordable promo fares to numerous domestic and international destinations, making travelling on a plane available to practically every Juan.

As the Robinsons brand further expanded to include Robinsons Land and Robinsons Bank, Gokongwei Jr.continued to help people manage their finances, expand their businesses and achieve their dreams of having their own homes.

Lance Y. Gokongwei, Gokongwei Jr.’s only son, and president and CEO of JG Summit, wrote the secrets to his father’s success in the book Lessons from Dad, John Gokongwei, Jr., "When it comes to work, Gokongwei Jr. believed there were no quick detours to success."

Lance wrote how his father taught him and his siblings the importance of hard work with a simple but effective rationale “If you don’t work, you don’t eat.”

Among the many other lessons older Gokongwei Jr. passed on to his children and their own children are the importance of not being beholden to anyone, knowing what your customers need, being able to march to the beat of your own drum, never putting your eggs in one basket (hence the diversification of their businesses), and not being afraid to get one’s hands dirty.

Lance said he learned many lessons from his father’s stories, but the one lesson he and his siblings keep in mind is: “The path to success is full of failure.”

Gokongwei Jr. had his own share of hits and misses when some of his business ventures fizzled out, but he remained undaunted and kept taking risks that eventually paid off.

Gokongwei Jr. was considered a visionary who planned decades ahead, such as when he planted the seeds for overseas diversification long before the creation of unified economic blocs like ASEAN.

His overseas expansion of URC enabled JG Summit Holdings to become one of the few Filipino conglomerates that have planted the Philippine flag in the region, making it the first Philippine Multinational Corporation (MNC).

Today, URC is recognized as one of the largest food manufacturers in Asia with market leadership in categories such as biscuits in Thailand and beverages in Vietnam. It has presence in nine countries in the ASEAN and in Oceania.

Employing close to some 75,000 people around the world made the Gokongwei Group one of the biggest employers in the Philippines today.

On his 80th birthday, Gokongwei Jr. blazed a trail in local philanthropy when he announced the donation of half of all his personal holdings to establish the Gokongwei Brothers Foundation (GBF), which is focused on providing STEM education and scholarships for the underprivileged.

Gokongwei Jr. considered education an investment in the future and put a premium on it. Even though he had to work at an early age to support his family, school was still a big thing for the former elementary and high school valedictorian of University of San Carlos in Cebu City.

In one of his commencement speeches Gokongwei Jr. was quoted as saying: “It is my belief that education is the only way to save this country. We need quality education to compete in this world.”

Lance wrote, “I think the chip on Dad’s shoulder for many years was not having a college degree. So later on, when he already had six children, he went back to school to take his master’s degree in Business Administration at De La Salle University."

He also donated the Xavier School Gokongwei Junior High School Building and the Immaculate Conception Academy Juanita ML Gokongwei Building, which was named after his mother who passed away in 1991.

In 2017, the Management Association of the Philippines (MAP) bestowed MAP’s Man of the Year award to Gokongwei Jr., recognizing his business acumen and management qualities.

In that same year, Gokongwei Jr. was also given the Legacy Award from the ASEAN Business Advisory Council (BAC) for his key role in the growth of micro, small, and medium enterprises in the Philippines and Southeast Asia.

Family always came first in the many principles and beliefs of Gokongwei Jr.

After his father died, the 13-year-old Gokongwei Jr. was forced to send his siblings to live with relatives in China. His decision to work early was motivated by his dream of saving enough money to bring them home.

“Dad’s enduring bond with his siblings has been passed on to the next generation. My sisters and I are very close to one another…[and] work together in our family business…We all work hard which is one of the biggest open secrets of our family business’ success,” wrote Lance.

Of all the roles Gokongwei Jr. played in his life, the ones his family knew of him mattered the most—son, husband, father, brother, uncle, cousin and grandfather.

He is survived by his wife of 61 years, Elizabeth Yu, and his children Robina, Lance, Lisa, Faith and Hope, and Marcia, his in-laws and grandchildren, brothers Eddie and James, the current chairman of the company, his sister Lily, and his nieces and nephews.

Free e-book!
This is the story of how billionaire John Gokongwei Jr. learned to dream big, work hard, and never give up.
By signing up, you agree to our Terms of Service and Privacy Policy.
Check your inbox!
Please check your inbox for the mail we've sent from Summit Media. It may take a few minutes. Check your spam/junk mail or promotions folders as well, in case you don't see it. You may then download the free "Big John" picture book. Please do so immediately as it's only available till November 15. Enjoy!
Sharing is caring!
Copy Link
Read Next
Read More Stories About
john gokongwei jr., Lance Gokongwei, Lisa Gokongwei-Cheng, Robina Gokongwei Pe, elizabeth yu, robina corporation, marcia gokongwei, big john anniversary
Post a Comment
Featured
Latest Stories
Trending in Summit Media Network