Rayver Cruz and Sarah Geronimo once fell in love and her parents were against it, too 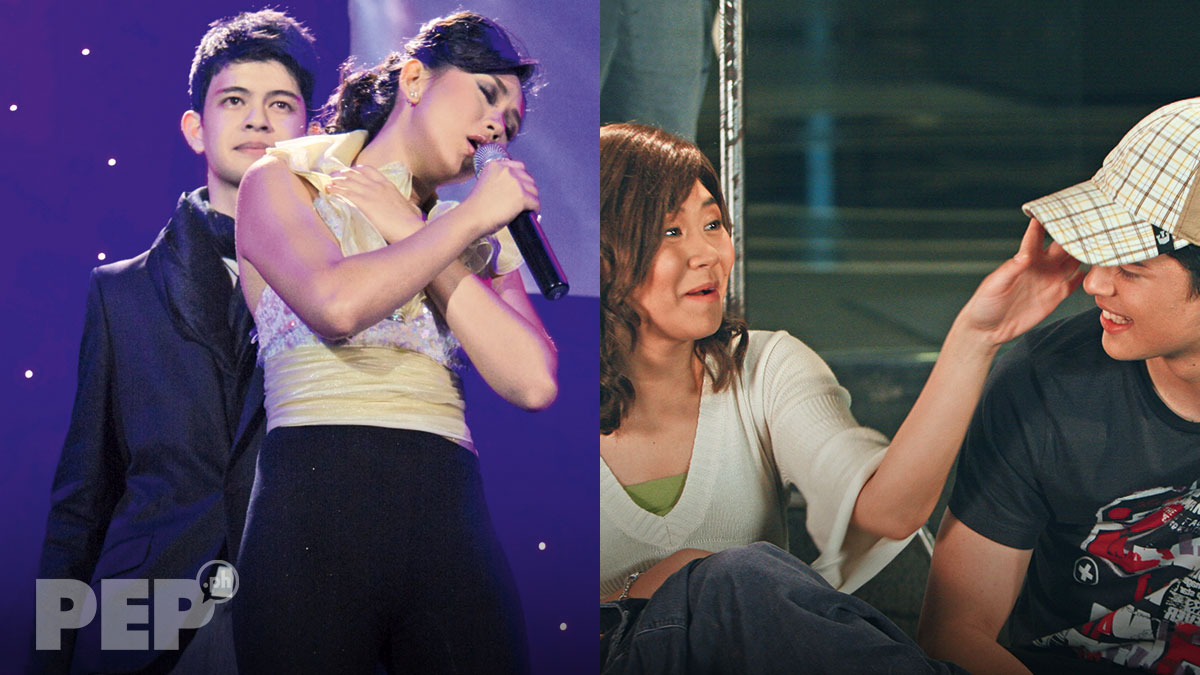 Sarah Geronimo was 19, Rayver Cruz was 18—and they were each other's first love.

The more unusual part of their tale is that very few knew the two were even in a relationship. Unusual because, while he was a rookie in showbiz, she was certainly one of the biggest stars in film and television. Then, even after the relationship fell apart, very few knew it was all gone.

Everything, after all, had been a matter of utmost secrecy. The two young stars, from the very start, were up against Sarah's parents, Delfin and Divine Geronimo, whose love for their daughter was as wide and limitless as their rule governing her love life was tight and ironclad.

Let no one get it wrong: Sarah was not to have a boyfriend.

It was not time, they said. Their daughter still had many things to do to raise the whole family from their terrible poverty with the gifts God had given her. Gifts, her Mommy Divine would add, that were God's clear answer to her devout and dedicated prayers as a mother.

The Sarah-Rayver love story could have remained under wraps except that Cristine Reyes, 21, was also now in the picture, and in August 2010 revealed on national TV that Sarah and Rayver had been an item. On top of which, in December of that year, she let blast a series of angry tweets after taking offense at something Sarah had said while the Popstar was rehearsing for a Sunday variety show.

Effectively, Cristine had invited the public in.

This was when YES! Magazine came to do the report "Sarah: Her First Real Heartbreak." With text and interviews by its editor in chief, Jo-Ann Q. Maglipon, the narrative became the cover story for its March 2011 issue, covered 39 pages (not counting the ads), and used no anonymous sources.

At one point, YES! detailed its sources: "This story can be only be pieced together like a jigsaw puzzle, as our own search for the full story yielded only patchy vignettes:

"When Sarah's assistant and friend, Anna Dasig, came to us with a vigorous replay of the sequence of events leading to the breakup...

"When Sarah's Mommy Divine allowed us into her home and, over four hours, wrung out the story of her pain, prayers, and protestations...

"And when Sarah herself joined us in the Geronimo prayer room to give us answers, however bare, to our questions, however stunted.

"Along the way we picked up more of the missing pieces: from Sharon Cuneta and from Judy Ann Santos, Sarah's self-appointed sisters, who felt compelled, on separate occasions, to speak with Rayver...

"From Beth Tamayo, now based abroad, who is close enough to the Geronimos to leave her fish koi to the care of Daddy Delfin, and who talks about the Sarah she knows...

"And from John Lloyd Cruz, whom we ask about Sarah, the star he teamed up with for his two highest movie grossers, and the star he finds "magnetic" and "captivating."

"Then, almost by happenstance, we get the intriguing piece belonging to Cristine Reyes, the pretty and sexy girl Rayver left Sarah for.

"Finally, we get the piece that Rayver alone holds: his own version of the story, what he did for love, what he suffered, what he did wrong, and what Sarah truly meant to him."

It is this last that we have extracted pieces of, and now share with PEP.ph readers who have loyally followed the story of Popstar Royalty Sarah Geronimo.

The Sarah-Rayver love story began when, days before Christmas of 2008, Rayver received a totally unexpected e-mail from Sarah.

At the time, they had yet to start filming You Changed My Life, the second of a three-part film franchise starring Sarah and John Lloyd Cruz. Rayver was in the cast.

Sarah's email to Rayver was a short but cute message that read "Hi," followed by a smile emoji.

They had an exchange of "hi's" but nothing followed after, until one day Sarah initiated a phone call between them.

She wanted them to be friends as they were appearing in a film together. Rayver wanted the same.

Their friendship, fueled by daily phone calls, eventually turned into a full-blown romance.

He admitted falling deeply in love with Sarah.

Indeed, their young romance was conducted from a distance.

While they were both mainstays in ASAP, they simply had no chance to talk because Sarah's Mommy Divine was always present or, at the least, had someone take her place to accompany her daughter at all times.

How did the young lovers communicate?

But, even this was a scene straight out of a movie. For their private time together, Sarah would lock herself in her bedroom and begin to switch on the computer. But she would be stricken with shyness, and their conversation would be touch and go.

Someone from Sarah's end had turned off the Internet.

In the months that followed, Rayver had become more eager to ask Sarah out to a dinner and a movie.

He actually suggested that Sarah bring her parents along if that was the only way they would allow the singer-actress to go out on a date.

However, Rayver said, Sarah was too scared to even ask permission, let alone tell them that they were in a relationship.

Still, love could not be denied, and the two lovebirds found a way to meet, if in secret.

Rayver was hanging out at the place of his brother's girlfriend, which serendipitously was in the same village where Sarah lived.

The couple managed to meet by the corner of one of the village streets.

And then Sarah left and rushed back home.

She could not stay a moment longer, Rayver said, because her Daddy Delfin was sure to come looking for her.

THEIR SECOND AND LAST MEETUP

Sarah and Rayver would get one more chance to meet, again in her village and again in secret.

When her parents had to bring one of the children to the airport, Sarah managed to get out of the Geronimo house.

This time, Sarah and Rayver hung out by the garden of the girlfriend of Rayver's brother.

That day, Rayver felt he was in heaven.

But even their little chat was cut short by the persistent calls coming from Sarah's household.

HURT BY DISAPPROVAL OF SARAH'S PARENTS

Rayver says he and Sarah shared many happy memories despite their cellphone-and-Skype-only relationship.

But their forbidden love would take its toll on Rayver, who was hurt by the disapproval of Sarah's parents.

He could not understand how he could so offend Sarah's parents.

In a separate interview with Mommy Divine for the same piece, the latter told Jo-Ann that she noticed a real change in Sarah since Rayver came into her daughter's life.

Mommy Divine blamed Rayver for disrupting the Geronimos' sacred family routine and their set moments of togetherness, with Sarah beginning to lock her bedroom door and taking calls at three in the morning.

In his defense, Rayver said that he never egged Sarah to disrespect her parents.

Relations between Rayver and the Geronimos would only get worse. In April 2010—the month and year Sarah and Rayver would break up—Daddy Delfin was heard calling Rayver "gago" on the set of ASAP XV.

The cracks in Sarah and Rayver's relationship were beginning to show.

Rayver felt that Sarah could have fought for him more.

It did not help his resolve that her parents kept saying to him that he was only out to use Sarah.

He understood, he said, how hard it was for Sarah to cope with everything around her: her career demands, her home situation, their secret relationship.

In the end, Rayver, who could find joy in just imagining taking Sarah out for dinner and a movie, was also too young to handle such a complicated relationship.

It did not help that Sarah and Rayver had jealousy issues.

Rayver said he knew of Sarah's previous attraction to a guy he would not name.

And, once she broke up with him because of this guy.

Then Sarah wooed him back.

But then also, Rayver met Cristine Reyes during an ASAP XV show in Boracay.

Rayver said they made casual talk and took pictures of themselves together, but insisted that there was nothing there.

Of course, there was no denying that they clicked. Rayver and Cristine found themselves hanging out again at a restobar in Parañaque that Rayver and his elder brother Rodjun owned. Rodjun and his girlfriend Diane Medina were with them that night.

There began the constant exchange of BBM (Blackberry Messaging) between Rayver and Cristine.

He said it was the reason he could not delete her from his BBM contacts even when Sarah had repeatedly asked him to.

It came to the point where he now wanted to break up with Sarah, but did not know how.

Still, he felt torn between the two women.

Rayver went for the girl who could proudly and openly commit to him.

But even before he could act on his choice, he made two big and wrong moves.

To Cristine, he denied his relationship with Sarah, when Cristine asked him. To Sarah, he denied courting Cristine, when Sarah confronted him.

In the end, Rayver broke up with Sarah.

This happened after a "speakerphone incident" involving Rayver, Sarah, Cristine, and Anna Dasig, the fan/friend who instigated a three-way call between the three stars.

Only, Rayver was kept ignorant of the setup. He had no idea he was on loudspeaker when he was on the phone with Cristine, and had even less idea that Sarah was on a third line listening to their entire conversation.

Here, Rayver told Cristine that he wanted to break up with Sarah, and that he was only looking for the right time and the right way to say it.

Cristine, however, made him choose between her and Sarah that very moment.

Rayver chose Cristine. Then, still not knowing that he had been set up, he did the brave thing: he called Sarah to confess that he had fallen in love with Cristine.

Sarah felt very betrayed, and once again she turned to the only constant in her life—her parents.

She and Rayver were no longer an item by April 2010, and that same month, rumors about their secret romance and Cristine's involvement in the breakup began to circulate in showbiz circles.

All three kept mum. But, even had they wanted to speak, their respective management teams had expressly forbidden them from doing so. Nobody wanted this blowing up.

For a time, Cristine stayed away from Rayver because, as he himself said, she did not want to get caught up in his complicated situation with Sarah.

But he also said that the attraction between him and Cristine did not wane, and they eventually became a couple in October 2010.

Rayver wanted it known to YES! that he never blamed Sarah for their relationship crumbling, even if, for him, it had, before Cristine had even entered the picture.