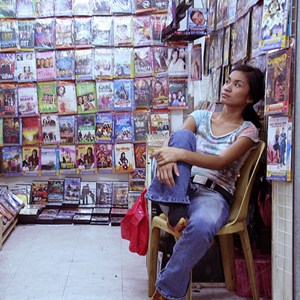 Ness Roque (in photo) plays Rita, a young girl who sells pirated DVD movies in the movie Now Showing. This film by Raya Martin has been chosen to compete in the Directors' Fortnight of the 61st Cannes Film Festival.

Aside from Brillante "Dante" Mendoza, another Filipino director will be taking part in the 61st Cannes Film Festival, the premier international film festival held annually in Cannes, France. Raya Martin has been chosen to compete in the 40th Directors' Fortnight for his film titled Now Showing.

This parallel section of Cannes showcases new and little-known directors from around the world. Since 1968, it has since launched the international careers of directors such as Werner Herzog, Jim Jarmusch, and the late Lino Brocka.

Only 23, Raya has been reaping international recognition for the past several years. His first feature, Short Film About the Indio Nacional, won several awards in film festivals abroad. His second film Autohystoria won the Lino Award Grand Prize and Best Director in Cinemanila International Film Festival last year. Raya is also the first Filipino to be granted the Fond Sud by the French government for his new film currently in development, Independencia.

Running at 4 hours 40 minutes, Now Showing is a coming-of-age narrative set in downtown Manila. A young girl's story is told in documentary style and a series of found footage. In between, clips from the 1960's Filipino classic film Tunay na Ina are shown.

The film project received the Hubert Bals Grant at the Cinemanila Boracay Co-Production Meeting in 2005. Post-production is supported by Ignite Media, Inc.

Behind the film is the 27-year-old producer Arleen Cuevas. Her last project Amazing Truth about Queen Raquela won Best Film at the Teddy Awards in this year's Berlin International Film Festival. Arleen has also collaborated with director Adolf Alix Jr. on several films, including Batanes and Tambolista.

Ness, who plays the lead role, is a 16-year-old theater actress currently taking up Filipino Literature at the Ateneo de Manila University. Upon learning that the film was selected in this year's Cannes, she said, "I am thrilled! When Raya called and told me that we're going to Cannes, I asked him to stop and let me breathe. Hindi ako makahinga!"

The Film Development Council of the Philippines gives support through a travel grant, enabling the production staff to attend the premiere in Cannes Film Festival, in cooperation with the Department of Foreign Affairs, the French Embassy in the Philippines, and the Philippine Embassy in France.