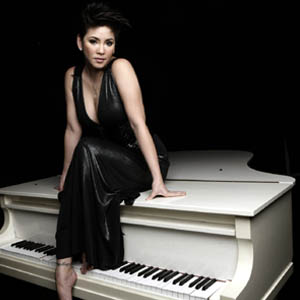 Asia's Songbird Regine Velasquez will be very visible in GMA-7, at least for the next two years after signing an exclusive contract with the Kapuso Network.

Aside from her regular musical-variety show SOP, Regine has already started taping for her second primetime series with the Kapuso Network, the Pinoy version of the hit Koreanovela My Name is Kim Sam Soon. Her first was Forever in My Heart. But before Kim Sam Soon, Regine will mesmerize late-night viewers with her amazing vocal prowess through her own musical show aptly titled Songbird.

Songbird is a weekly musical show where Regine will sing some of the most popular songs and compositions of some of the world's best singers and composers. This will start airing on May 15, Thursday, after the Telebabad block of GMA-7.

"I'm very thankful to GMA for trusting me, for giving me the opportunity to do what I love to do most, which is singing. I've always dreamed of having a show like this and I feel very, very blessed na ibinigay po ng GMA sa akin itong napakagandang show na talaga naman pong pinagkakaabalahan ng aming buong staff and crew," Regine began during the press conference of Songbird held last night, May 9, at Melo's restaurant on Bohol Ave., Quezon City.

Regine told the entertainment press about the concept of her solo show.

"Nakakatuwa po siya, kasi thematic po siya," she said. "Every week, there's a different theme, we feature different artists, songwriters, genre; we even do movie themes. So every week is different. We also have different guests for each week depending on what theme ang meron sa week na ‘yon. Ibinabagay rin po namin ang aming guests."

REGINE'S STAGE. Aside from the unique concept of Songbird, Regine is also very proud of her show's stage design.

"No, like I said," she continued, "it's been my dream to have a musical show. Maipagmamalaki, kasi nga it's been a long time na rin since walang musical show. Hindi siya variety show talaga, it's a straight musical.

"Ako, sa akin, having a show like this is something to be proud of. Kasi siyempre, bihira na itong naibibigay sa mga singers na katulad ko. And GMA actually picked me to have this kind of special every week. I am very, very proud to be given this opportunity."

So does this mean viewers won't be hearing Regine belting out songs?

SONGBIRD'S CHOICE. Each week, Regine will also get the chance to sing a song only a few are familiar with.

"Kasi ‘pag nag-feature ka ng isang artist, like Barbra Streisand, yung mga alam ng tao. Understandable naman kasi yun ang ini-expect ng mga manonood. But I also requested na may isang kanta na hindi masyadong kilala ng mga tao. Ako lang ang may alam!" she joked before adding, "Pero maganda. Something that they would appreciate also. Like yung naririnig n'yo kanina, yung ‘Who Needs To Dream,' that was a Manilow song, that was included in the soundtrack of Copacobana. Not everybody happens to know that song, and I happen to love that song very much."

For each episode, the Asia's Songbird will be singing seven to eight songs. "And then minsan, meron kaming medley na about five minutes, ganyan. Para siyang concert talaga," Regine added.

One of Regine's guests on the pilot episode of Songbird is Richard Gomez, her leading man in the movie Pangarap Ko ang Ibigin Ka and the drama series Forever in My Heart. A member of the press asked how they were able to convince Richard to sing a duet with Regine.

MOST DIFFICULT SONG. It seems that Regine has no trouble singing any kind of song. But if there's one song that she finds very difficult to sing, it has to be the Philippine National Anthem, "Lupang Hinirang."

"Hindi nga, totoo nga... Hindi naman po dahil sa hindi ako proud sa ating National Anthem. Actually, I'm very proud... It's a beautiful song, but it's one of the hardest songs I have ever sung in my life. I don't know, maybe because it's long and iba-iba yung lyrics niya. 'Tsaka nakakatakot na magkamali. That's the hardest song ever to sing," she explained.

FREE CONCERT. Now that the viewers have the chance to see and hear Regine perform on TV free of charge, isn't she worried that this would somehow affect her concert ticket sales?

"Nowadays, actually kahit naman before, I don't really do a lot," she clarified. "Di ba, I usually do one major concert a year and then one series? Yun lang naman talaga ang ginagawa ko. And then the other times, mga raket-raket, pupunta ako ng abroad or I'll do a movie.

"I don't think magsa-suffer yung concerts kasi like I said, I don't do it naman as often. Like for this year, I'm only going to do one. And besides, the show is not naman three hours. Actually, it's only 45 minutes, so medyo bitin pa nga ng konti. So, aabangan nila yung next, parang may itutuloy kinda na thing.

"Sa ngayon, sobrang happy ako kasi I've always wanted to do a show like this. Pero I never really asked naman for it. Because at that time, kasi nga I felt iniisip ko rin na baka mag-suffer yung concerts, that's why I didn't ask for a musical show. I was also thinking, I was already doing SOP...