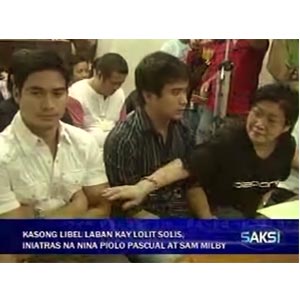 "My mom is on the same age, 61, I don't wanna see her in jail. So I'm really happy and thankful na umabot tayo sa pag-aayos," said Piolo Pascual after the special hearing held yesterday at the Manila Regional Trial Court. He and Sam Milby dropped the libel case they had filed against Lolit Solis.

The special hearing was called to resolve the libel case that the actors filed against Lolit and Veronica after the columnist wrote in Pilipino Star Ngayon last October 15, 2007 that she saw Piolo and Sam having "sweet moments" at the poolside of Sofitel Hotel in Pasay City on October 12.

At the said hearing, Lolit signed a statement of retraction. Part of the statement read: "There is no factual basis for my article, which came out on October 12, 2007. I am extremely sorry for dragging the names of Sam and Piolo."

In an interview with PEP Contributor and GMA News reporter Nelson Canlas, Lolit said that she felt hurt by her friend Johnny Manahan, the Star Magic head who handles the careers of Piolo and Sam.

Meanwhile, Piolo and Sam withdrew the 12-million libel suit against the entertainment columnist.

Before leaving the court, both parties promised that they will not say or write anything against each other.

PEP (Philippine Entertainment Portal) got a report from a source, who requested anonymity, that the settlement between the two camps was initiated by Seiko Films producer Robbie Tan. Robbie is said to be a close friend of Joji Alonso, the lawyer of Piolo and Sam.

Lolit and Veronica reportedly met with Robbie and Atty. Alonso last Friday, May 9, a few days after Piolo and Sam made a visit to the office of Secretary Raul Gonzalez in DOJ. It was in the said meeting that Lolit allegedly agreed to make a retraction.