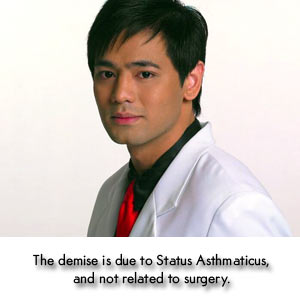 "If you ever encounter this rumor, please help me dispel it. I am alarmed that since my colleague Dr. C's [Manny Calayan] lawsuit came about, some people are starting to revive the rumor and crucify me without any white facts as basis," pleads Doctor Hayden in his blog about a rumor implicating him in the death of a former patient.

For the past months, PEP (Philippine Entertainment Portal) has been hearing rumors linking celebrity doctor Hayden Kho to a former patient's death. The patient allegedly died days after a certain surgical procedure was done on her. A different version alleged that the patient died during the operation.

PEP chose not to write any story since we could not verify the rumors. In several interviews, Dr. Hayden was silent about it. Even his real-life partner Dr. Vicki Belo, medical director of Belo Medical Group where Dr. Hayden works, also kept mum.

For several weeks, PEP heard nothing more about the issue—until last Monday, May 19, when some reporters started to nag Dr. Vicki Belo about it again. This was during the press launch of Belo Essentials newest endorser at the Dolce bar in Tomas Morato Avenue, Quezon City.

Dr. Vicki Belo tried to veer away from the issue, saying that she did not want to comment about it and preferring to stick to the real purpose of the media junket. A reporter also dared to ask Crystal Henares, Dr. Belo's daughter and general manager of Belo Essentials, about the alleged complaint against the Belo Medical Group. Crystal also evaded the question and politely answered, "I think na-answer na po ni Mommy 'yon. Bettter for her to answer that instead."

Days later, PEP was able to find a journal entry written by Dr. Hayden Kho himself. In his Multiply account, Hayden's Haven, the cosmetic surgeon explained his side of the issue in his blog entry titled "Reviving Rumors (re-written)," dated May 6, 2008.

"Perhaps you are hearing rumors about me and a patient's death that happened about three months ago. There are many variations to the rumor, which I do not want to dignify by talking about it.

"If there's anything important that you need to know, it is that the husband USED to blame me for the death no matter how much all the patient's doctors (including myself) explain to him that she died FROM ASTHMA, AND NOT RELATED TO THE SURGERY.

"They finally had an autopsy done and it cemented the fact that her death is indeed unrelated to surgery. The Philippine Medical Association had also investigated the case and released a statement. The demise is due to Status Asthmaticus, and not related to surgery.

"With that, my name has been cleared and the family finally quit blaming me and the other doctors who handled the patient's case.

"If you ever encounter this rumor, please help me dispel it. I am alarmed that since my colleague Dr. C's [Manny Calayan] lawsuit came about, some people are starting to revive the rumor and crucify me without any white facts as basis. (Click here to read related article)

"Relevant Rumors I need to dismiss. (I wish I didn't have to do this. gah.):

2.) Patient has no clearance from doctor to undergo surgery. - not true. she has, from Salve Regina Hospital

3.) Patient died while undergoing operation. - not true. She complained to her family doctor that she's having an attack of asthma again 5 days after the procedure.

4.) Belo settled with millions. - Not true. I wouldn't dare. There's no money involved. Only revelations of truth delivered to the patient's family in a sympathetic way."