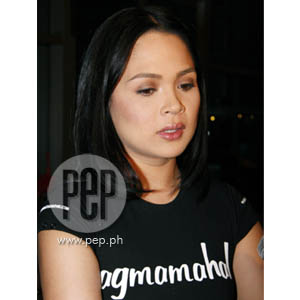 Not even her brother’s assurance could get Judy Ann Santos out of the blues. “Sana nga may mga kakampi ako and sana naiintindihan nila ako, but I don’t think so. I’m just so devastated right now,” Juday confided to her brother Jeffrey Santos through a text message.

The negative publicity and all the brouhaha incurred by her Meralco infomercial has taken its toll on young superstar Judy Ann Santos.

Judy Ann, or Juday to her friends and followers, sent a text message to her brother Jeffrey Santos expressing her sadness over the matter, which in the span of only a few days has become a national political issue.

In an interview with GMA-7 News, Jeffrey revealed that Juday, who is currently in London, is alarmed by the public backlash.

But even her brother's assuring words were not enough to ease Juday's depression.

The Meralco infomercial shows the multi-awarded actress explaining the controversial systems loss issue, defending the power company against allegations of overcharging by passing unnecessary charges to the consumers to cover the firm's own expenses.

Many people reacted violently and in the process vented their ire on Juday. Last June 3, the Volunteers Against Crime and Corruption (VACC) made a call asking the public to boycott Juday's film and TV projects as a show of contempt.

Immediately, Juday's longtime manager Alfie Lorenzo tried his best to counter all the negative publicity brought about by the infomercial. He even assumed that the ad might be part of an orchestrated plan to discredit Judy Ann. Alfie, for the past couple of months, has been in a rift with ABS-CBN's talent arm Star Magic. ABS-CBN and Meralco are both owned by the Lopezes.

Alfie pleaded with the public to let Judy Ann explain her side once she returns from London.