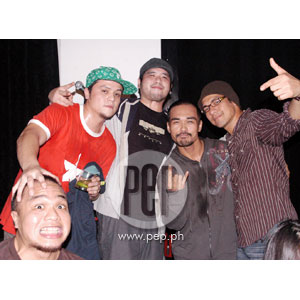 In celebration of Gary Valenciano's 25th year in the industry, Paolo Valenciano gathered some of his rock n' roll musician-friends to pay tribute to his dad's music: Sugarfree, Kjwan, Rivermaya, Julianne, Out of Body Special, Us-2 Evil-0, and Urbandub. The special event was held last Wednesday, August 20, at the Mag:net Café in Bonifacio High Street, Taguig City. Here, Gary joins the Marc Abaya-led band Kjwan for

Pop meets rock last August 20 at the Mag:net Café in Bonifacio High Street as Gary Valenciano was treated to a surprise by his son Paolo to celebrate his dad's 25th year in the entertainment industry.

Unlike the surprise party tendered by Star Records a few weeks back at the Conway's Bar of the Makati Shangri-La Hotel, Gary was awed to find young rock n' roll musicians playing his songs and expressing how much he has influenced them as artists.

According to Paolo—who is a member of the band Salamin—rock musicians putting their own touch on a Gary V tune is something of a novelty considering the fact that his father's music has always been categorized as pop and radio-friendly.

"Basically it's a Gary V tribute kasi, di ba, ‘yong Star Records released the 25 artists tribute album? So kami parang gusto din namin magbigay ng tribute so we got all these rock bands to perform tonight. We've been wanting to do something like this ever since three years ago pa," Paolo told PEP (Philippine Entertainment Portal) while everyone was anxiously waiting for Gary's arrival.

ROCKING FOR GARY V. The event organized by Paolo was simply a tribute party—meaning, the event was not recorded with the intention of releasing a live record. There is also no formal studio album in the works composed of bands playing Gary V music patterned after the successful APO Hiking Society two-volume tribute disc.

Participating in the event were Kjwan, Sugarfree, Rivermaya, Urbandub, Out of Body Special, and singer-songwriter Julianne. Imago's Aia de Leon was also present as she joined Rivermaya in their rendition of "Natutulog Ba Ang Diyos?"

Director Quark Henares, who served as the evening's host, also performed together with designer friend Mich Dulce. Quark and Mich formally introduced their quirky band's name as Us-2 Evil-0.

"I think I started singing because of that guy," Sugarfree's Ebe Dancel confided to PEP.

The talented singer-songwriter shared his memorable Gary V moment: "Nung grade 2 ako, nung may family reunion kami and may singing contest and I didn't have a piece so I sang Gary V's ‘Reaching Out.' And then, I followed his career and Gary's still around, grabe! He's getting better every day."

All of the band members present that evening grew up listening to the iconic singer-performer and although their respective genres are not the same, it doesn't necessarily follow that there's no respect and admiration on the part of these young musicians for the man dubbed as Mr. Pure Energy.

Although they're not listed as part of the performers, Sponge Cola's Yael Yuzon—who is another self-confessed Gary V fan—dropped by to watch the entire event.

"Kasi ‘yong genre naman namin, medyo malayo naman talaga sa ginagawa ni Gary V to a certain extent. Although all local music naman are classified under OPM but ‘yong idea lang na ang positive niyang tao. Parang doon pa lang, the song becoming this positive influence on the people, parang nadadala ka na rin. Parang you also want to strive to be a better person. Parang as cheesy at it may sound, ganoon talaga, e, you want to be better," smiled Yael, who was silently watching the entire show together with other fellow musicians near the bar's front door.

Rehearsing a Gary V number was a fun experience according to Julianne, who did an astounding cover of Gary's modern single, "Wait Forever."

"I let my band learn it and then we met in the studio and we're like, ‘Okay, how are we gonna do this?' We tried to put our own spin into it but then, of course, we also did our best to preserve the integrity of the song," explained the voice behind the hit song "Tulak Ng Bibig."