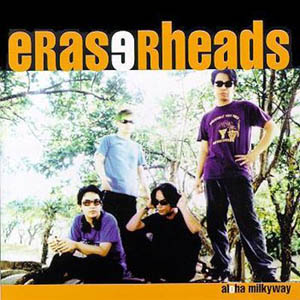 Arguably the best Pinoy rock band, Eraserheads had a reunion concert earlier tonight, August 30, attended by 60,000 people. But the concert had to be cut unexpectedly because of lead vocalist Ely Buendia's health condition.

It was the musical event of the year and everyone anticipated the good news: the one-night-only reunion concert of the most successful and arguably the most influential band the Philippine music scene has produced, the Eraserheads.

The former schoolmates at the University of the Philippines in Diliman, Ely Buendia, Raimund Marasigan, Buddy Zabala, and Marcus Adoro formed their band in 1989 with a name culled from a surreal David Lynch movie titled Eraserhead (1977). Their first album was actually a boot copy of the demo tape they tried to sell to recording companies, who all turned it down because it was not "pop enough." They remastered the demo tape and sold it, initially just in UP, with the album titled as Pop U.

In 1992, Eheads released their debut mainstream album Ultraelectromangnetic Pop (in reference to their favorite anime Voltes V) and the album was the first to be officially given a Diamond Award, generating over 10 ten-times platinum sales, which at that time was 30 thousand pieces.

In 2002, the group disbanded to the suprise and dismay of their countless fans. Ely was the first to leave the band because he felt he was not supported by his three friends after a dispute with the Eheads' road manager in 2002.

A post album was released in 2003, Please Transpose, as the four members went to on to go solo and form their own groups.

THE REUNION CONCERT. Middle of this year, the much talked about reunion concert was finally and officially announced. It was to be free of charge to be staged on August 30 at the Cultural Center of the Philippines open grounds, with the Global City Open Field at The Fort as an alternative venue. It was initially reported that a big tobacco corporation would shoulder all the costs. Rumors ran rampant on how much they were paid for this reunion concert—from P2.5 million each to a whopping P10 million per band member of the Eheads.

On August 22, the concert was immediately scrapped as the powerful lobbyists for the anti-tobacco campaign put pressure on the tobacco corporation to pull out its sponsorship, but it was the band members themselves who saved the concert. Raimund officially announced in his blogsite that the concert will push through as scheduled.

Fans did not mind though as tickets for the only two sections sold to the public—P1,300 for Patron and P800 for General Admission—went flying the moment it was sold through Ticket World.

At 6 p.m. last night, the main streets around The Fort were closed due to traffic and parking conditions. The open ground erased the record held by the Beyonce concert early this year.

It was divided into four sections with no seats, the 30,000-capacity general admission, the 20,000-capacity patron, the 8,000-capacity by invitation only VIP section and the 5,000-capacity Super VIP. It was filled to the rim with more than 10,000 people just outside the closed venue willing to just listen to the band sing their songs.

AN UNEXPECTED FINISH. The concert started almost immediately at 8:30 p.m. against the ticket time at 8 p.m., a rarity in any local event. With no front act and no introduction at all save for the announcement of their band, the Eheads opened the first set with "Alapaap" finished by fireworks to the delight of the over 60,000 audience.

With no spiels at all and hardly a break, the band proceeded to sing fourteen more songs—"Ligaya," "Sembreak," "Hey Jay," "Harana," "Fruitcake," "Toyang," "Kailan," "Shake Your Head," "Torpedo," "With A Smile," "Huwag Mo Nang Itanong," plus three other songs—before it was announced that there will be a 20-minute break before the second set.

It was a performance of a lifetime as Ely sang all the 15 songs with his three former bandmates backing him up. There was hardly anything emotional for the members though as they just continued playing one hit after another, even though the crowds of both VIP and Patron were shouting "group hug!" after every song.

The timer started at 9:35 p.m. but no one returned at 10 p.m., five minutes past the allocated 20-minute break. At 10:10 p.m., Marcus, Raimund, and Buddy returned onstage with a lady who was introduced by Marcus as Lally, Ely's sister

Lally became the bearer of news: "Thank you for supporting the reunion concert of Eraserheads. We, however, regret to inform you that due to my brother's poor health, the emotional and physical stress that he's been experiencing, we apologize for cutting the concert short. My brother Ely had to be rushed to the hospital for medical attention. Again, we apologize and thank you all for coming here tonight."

Next to speak was the concert producer, who confirmed that Ely was immediately rushed to the hospital during the break and asking for prayers and understanding from the audience.

There was no commotion, no shouting, and no hissing from the audience as they all quietly and sadly left the venue after the announcement.

Ely was brought to Makati Medical Center. It was earlier thought that he would undergo a bypass operation but a source told PEP that no such thing happened; Ely just experienced stress and fatigue.

A report reached PEP (Philippine Entertainment Portal) past midnight that the vocalist of the famous '90s band would be transferred to Philippine Heart Center.

To date, no further notice was made on whether another Eraserheads reunion concert would be slated again or not.