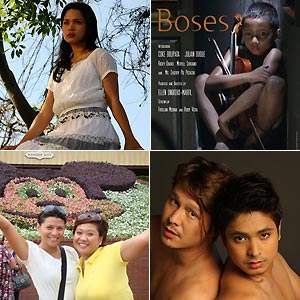 According to Gawad TANGLAW, the Best Films of 2008 are (from upper left, clockwise) Ploning, Boses, Jay and 100.

Gawad TANGLAW has chosen four films as the Best Films of 2008, all of which have the right to be called the Kapuri-puring Pelikula ng Taon. These are Ploning, Boses, Jay and 100.

Karen Davila of ABS-CBN and Susan Enriquez of GMA-7 will be given the Natatanging Gawad Tanglaw para sa Mass Media. In the field of television, GMA-7 and ABS-CBN share the award for Best TV Station of the Year. Last year, the award was given solely to the Kapamilya Network.

One TV show from NBN-4, Bantay OCW, made the grade by being chosen for the category Best Public Service Program. It shares the award with ABS-CBN's Salamat Dok and GMA-7's Wish ko Lang.

For the seventh edition of Gawad TANGLAW, Summit Media's showbiz-oriented magazine YES! is recognized once again as Best Showbiz Magazine of the Year.

The awarding ceremony is scheduled to take place on March 2, 2009 at the University of Perpetual Help System-DALTA, Las Piñas campus.

Here is the list of winners of the 7th edition of the Gawad TANGLAW:

Best Fashion Magazine Metro HIM (for Male) / Chalk (for Female)