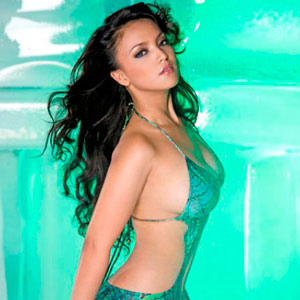 Savannah Lamsen, a 23-year-old ledge dancer from Quezon City, didn't make it to the Fearless Four of Pinoy Fear Factor: Argentina, South America. She was eliminated in the Octava Ronda de Eliminaciόn (Elimination Round 8) of the ABS-CBN reality show last night, February 12.

"Ayoko pang umuwi...hindi ko ine-expect na mangyayari yun! It's time for me to go," said Savannah after she failed in the third stunt of Octava Ronda de Eliminaciόn.

In the first challenge of Elimination Round 8, the participantes were required to hold on to a stick at the end of the rope that would be dragged by a horse trotting in circles on a muddy field. Whoever could hold on to the rope the longest in this stunt, called Atrasado Por Un Caballo (Slowed Down by a Horse), would be safe from elimination and would automatically compete in the final round.

Manuel Chua gripped the tow rope the longest with a record time of 1:01. He also holds the record for being the only participante in the history of Fear Factor who tired a horse out with his strength.

On the other hand, Jommy Teotico stayed on the tow line for 54 seconds while Marion dela Cruz hung on for 39 seconds. The women did not perform well in the stunt. Janna Dominguez's time was just five seconds while Savannah's was only three seconds.

The next stunt was called Cinta Transportada de Fruticias (Strawberry Conveyor Belt). Forty strawberries are transported on a tilted conveyor belt. Each participante must catch them one by one with his mouth and place them in the box opposite his spot.

This second challenge seemed easy for the participantes. But since this is Pinoy Fear Factor, a chosen fellow participante could put distractions on the conveyor belt along with the strawberries to make the challenge more difficult. The one who placed the most strawberries in the box would be exempted from competing in the final stunt of Octava Ronda de Eliminaciόn.

Savannah got one strawberry, Marion got six, and Jommy and Janna both had eight strawberries. Manuel, who was present to observe his potential contenders in the final round, was assigned to choose between Jommy and Janna on who would compete in the third stunt of Elimination Round 8. Manuel chose Jommy based on his assessment that Janna caught more strawberries but, unfortunately, these did not reach the box, reducing the total count of her strawberries.

The third stunt was the Pared Giratoria (Rotating Wall). In this stunt, the participantes must scale both sides of a rotating wall in as many revolutions as they can in ten minutes without falling off. The one who performs the least revolutions will go home to the Philippines.

Jommy was the only one able to last the entire ten minutes, pulling off 12 revolutions and thus securing a place in the final round. Both Marion and Savannah fell off the wall. However, Marion was able to complete three revolutions before falling off while Savannah slid off the wall at the onset, making her the 8th eliminado of Pinoy Fear Factor: Argentina, South America.

What lessons did she learn in Pinoy Fear Factor?

Was she able to conquer most of her fears?

Next week, the remaining participantes—Manuel Chua, Jommy Teotico, Marion dela Cruz, and Janna Dominguez—will be facing the ultimate challenge of Pinoy Fear Factor. Find out who will be tagged as El Ultimo Participante and who will win P2 million and a house and lot in Pinoy Fear Factor: Argentina South America.

Watch the last few episodes of Pinoy Fear Factor every night on ABS-CBN's Primetime Bida and every Saturday at 7 p.m. on Studio 23.