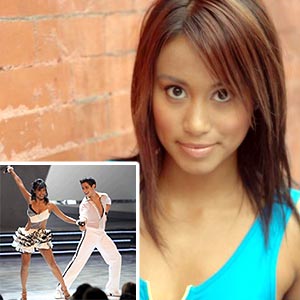 Filipino-American dancer Karla Garcia is making Filipinos proud again by impressing the judges and studio audience of the reality dance competition show So You Think You Can Dance.

Another Filipino-American is slowly making a name in the U.S. via another popular reality show. Her name is Karla Garcia, and the show that potentially would make her a household name across the U.S. very soon is So You Think You Can Dance.

So You Think You Can Dance is an American dance reality show and competition that airs on Fox in the United States. The series first premiered on July 20, 2005, and has a premise similar to the American Idol series of singing competitions, with nationwide auditions leading to the discovery of the next big star. The show was created by Idol's Simon Fuller and Nigel Lythgoe and is produced by 19 Entertainment and Dick Clark Productions.

A mixture of contestants are chosen for the show, ranging from unknown street dancers to winners of national championships. All contestants have to work their way through rigorous auditions and, over the course of the show, are assigned different dance styles and partners each week to test their versatility.

In the show's fifth season, Fil-Am dancer Karla Garcia became an instant favorite. She impressed not only the show's studio audience, but also the show's high-profile and outspoken panel of judges made up of the show's co-creator Nigel Lythgoe, ballroom dance champion Mary Murphy, and film director-actor-dancer-choreographer Adam Shankman.

Karla, who has been dancing competitively since age six, made it to the show's Top 20 picks after going through four grueling days of different dance genres. Her cha-cha number with co-competitor Jonathan Platero (to the tune of Lady Gaga's "Poker Face") during the show's episode to pick the Top 20 dancers elicited rave reviews from judges Shankman, Murphy and Lythgoe and wild screams from the audience.

Shankman said their performance was "really good" and even self-bleeped himself when describing how good the pair were. Murphy gave them the biggest scream this early in the season because of their sexy cha-cha number. Lythgoe, on the other hand, said both Karla and Jonathan slipped under the radar but burst onto the stage with their performance because of their dynamic chemistry.

Although Karla was later included in the show's bottom three girls (one of the three girls which had the least viewers' votes), which eventually commanded her to do her "dance for your life" solo dance, she was quickly saved by the judges after being impressed by her graceful performance to Aretha Franklin's "(You Make Me Feel Like) A Natural Woman."

MORE ON KARLA. From her sister Kai Garcia, here's more about Karla:

"Karla Puno Garcia grew up in Oxon Hill, Maryland, a suburb of the Washington, DC Metropolitan area. She received her dance training at Fran's Studio of Dance and started competing nationally at the age of six, copping a number of dance titles throughout her elementary (St. Columba School) and high school (Bishop Ireton) years.

"She performed with Debbie Allen in Brothers of the Knight, a Kennedy Center production, and at the 2001 NBA All-Star Game at the MCI Center. She received a scholarship to New York University's Tisch School of the Arts, where she obtained a BFA in Dance with a minor in Journalism. Karla became dance chair and choreographer for the International Filipino Association (IFA) dance team at NYU.

"During her final year of college, she landed a spot on the Broadway show Hot Feet through an open call for dancers in New York City. She was the youngest cast member (20 years old at that time) of this dance musical set to the hits of Earth, Wind, and Fire. She has performed at Carnival NY and LA with Yussuf Nassir, Jonathan McGill, and Bulletyme; and appeared at a 2007 Rite Aid Industrial. She recently shot the latest Lucille Roberts Fitness commercial.

"In 2007, she was a Las Vegas finalist on Fox's So You Think You Can Dance Season 3. Later that year, she was in the ensemble of the Rockettes show touring in Florida. From Florida, Karla immediately joined the National Tour of the Broadway hit Wicked, going on the road for seven months.

"Now residing in Brooklyn, New York, she teaches at select studios all over the east coast and continues to perform. She is a member of the Boogie Bots crew (from MTV's America's Best Dance Crew show, Season 2).

"Karla constantly strives for creative growth, as she aims to combine influences from her technical background with different textures of contemporary, jazz, and hip hop. She believes that dance is an evolving art, with room for new ideas, bold innovation and a myriad of cultural influences.

"She revels in the richness of her Filipino-American heritage and in the friends that inspire her. She thanks God for all the gifts He has given her."

VOTE FOR KARLA. In the coming weeks, Karla's fate in So You Think You Can Dance will depend on the viewers' votes. Whether she makes to the Top 10 or ultimately be the one to be judged "America's Favorite Dancer" will depend on the people watching the show. That's why Kai calls on all the Filipinos in the States to vote for Karla.

"Alas, the show is a popularity contest. It's a dance contest second. Hopefully people would vote as many times for Karla. We need to keep those votes in if we want to see more of Karla's dancing.

"We hope people will be in the loop specially our kababayans with relatives in the States to support her. Voting is free!" invites Kai.