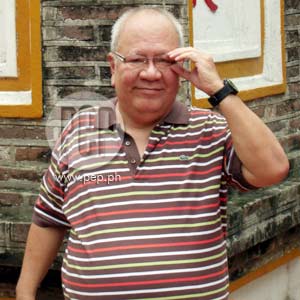 It was the best send-off anybody could give to someone they truly love.

Friends, talents and relatives of Douglas Quijano were emotional last night, June 19, at the second to the last Holy Mass for the late manager, celebrated inside Heritage Memorial Chapel in Taguig City, by Father Mario Sobrejuanite of the Society of St. Paul.

The atmosphere was solemn when the Mass started at 8 p.m., but it quickly turned melancholic towards the end two hours, due to the eulogies offered by five of his talents and friends: Jomari Yllana, Gelli de Belen, Lucy Torres-Gomez, Anjo Yllana, and businessman Ben Chan of Bench, who sponsored the night.

There was barely enough room to move about in the chapel which was nearly filled to capacity. Other celebrities who attended the Mass were Richard Gomez, Nadia Montenegro, Carmina Villarroel, Zoren Legaspi, Kian Kazemi, Cory Quirino, Tyron Perez, and the Gutierrezes: Eddie and wife Annabelle, and siblings Ruffa and Richard.

Gary Valenciano performed three songs ("I Will Be Here," "How Did You Know," and "Catherine's Song") towards the end. During his song, a black and brown bird that looked like a jay appeared above the coffin of Tito Dougs. The audience also released butterflies in the air, adding to the melancholia of the moment.

In his final blessing, Father Mar, who also celebrates the weekly TV Mass on Studio 23, said he was amazed at how people remember the late manager.

"Ang isang taong mapagmahal lamang ang tunay na mamahalin... We can truly profess Douglas was a loving man, and we thank the Lord for that," the priest said.

"Tito Dougs was but a young man attending high school or was it college... I'm not sure anymore. But it was his high school or college graduation and all of the graduates had to be in a tie. In school, when they were assembling for the graduation rites, he noticed that a classmate of his had no tie simply because his parents could not afford him one. Tito Dougs went all the way back home and arrived just in the nick of time to hand his classmate a spare tie that he had. After that, they never saw each other again.

"Many many years later when Tito Dougs was already a writer and starting in showbiz as a manager, he encountered some financial trouble. He could not pay some of his utilities. If I remember correctly from the story, it was his electric bill that mysteriously never got disconnected for many months despite his non-payment. It turned out that the person in charge of collection always managed to put his bill under the heap of unpaid others, kindly extending his grace period until he was able to get back on his feet. That kind man turned out to be the [youth] from many years ago. And it was this person's way of thanking Tito Dougs many, many years later for something Tito Dougs had done for him," Lucy said.

It was Lucy who was the most distraught over her manager's death.

"One day, I still believe that God will fill with something beautiful the space that for now just hurts too much. And when that happens, maybe then I will also be able to forgive you for not saying goodbye," said the wife of Richard Gomez, who succeeded in holding back tears.

"CONTRACT" BASED ON TRUST. Ben Chan, who owns clothing brand Bench, cried throughout his delivery. He narrated how he met Douglas, and how their partnership through 20 years helped Bench rise to success.

"It was 1989, and I was looking for someone to endorse my clothing line. And I was introduced to you by Jun de Leon [famous photographer]. I was scared stiff then because the picture I had of you then was... mataray or scandalous, hindi naman pala. The Douglas I met then was a smiling face, funny man, who was quite reserved and had a great sense of shame.

"It seems that my baptism to the showbiz world started on the right foot. You opened the doors and my experience with you made me decide to pursue big-celebrity endorsement... We always rely on each other's word of honor. It may sound unbelievable, but that was how we dealt. The level of trust we had was beyond contracts and legal documents. It was a relationship that was purely based on trust," Chan said, who promptly broke down in tears after the statement.

LET HIM BE OUR GUARDIAN ANGEL. Anjo Yllana also broke down in tears during his eulogy. He sang two lines of Florante's "Handog."

The Eat Bulaga! host said his family owes a lot to Douglas for helping them through financial troubles. There was only one wish Anjo wanted to ask from God.

"He was beside me as my family and I went through a difficult time. Hindi niya kami pinabayaan. Let us continue to remember what he has taught us in his sometimes masungit, always straightforward, and truly cheeringly loving way," he said.

"KEEP HIS MEMORY ALIVE." Gelli de Belen was the most optimistic of them all.

Gelli admonished everyone to always remember Douglas Quijano's legacy: "Let us celebrate his 64 years and thank Dougs for being part of our lives, and keep his memory alive."