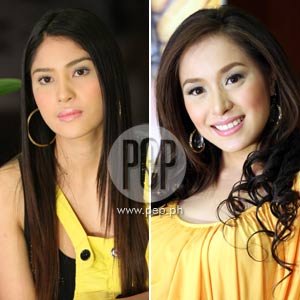 Who's telling the truth? The camp of RR Enriquez (left) claimed, "Cristine has attitude problem." On the other hand, a source said Cristine Reyes (right) was just provoked.

A non-showbiz source, who is a buddy to some young stars, revealed to PEP (Philippine Entertainment Portal) the "other story" behind an alleged heated exchange of text messages between Cristine Reyes and RR Enriquez, which purportedly prodded the former to leave the ABS-CBN gag show Banana Split.

An earlier report in local tabloid Police File Tonite last June 16 claimed that the StarStruck alumna's departure from the comedy show was caused by a rift with the other female cast members, namely RR, Pokwang, and Angelica Panganiban.

In the article, the three ladies were unanimous in saying that Cristine has an attitude problem. There was one instance, according to them, when the younger sister of Ara Mina snapped at the show's executive producer: "Pabihisin niyo yung isa [Angelica], ba't ako ang pinabibihis niyo?"

Aside from the "attitude problem," the article also mentioned the young actress's use of a swear word in one text message to RR, and this was reported reason why the three ladies allegedly ganged up on Cristine.

But Cristine's camp has a different story.

First clarification: The peeved text message of the Eva Fonda star was only a reply to the hurtful message sent by RR. In short, the former Kapuso talent was provoked.

The source said Cristine was so irked by the "kunin ka na ni Lord" line that she immediately sent RR a message that included the swear word "p*t*."

With regard to the "hindi pagti-taping" issue mentioned in the same tabloid report, the story narrated by the source was totally different from the version of the three ladies.

Second clarification: When Cristine celebrated her birthday on the show last February, RR and Pokwang reportedly started giving her the cold shoulder.

When Cristine was given lead spots in the skits, this allegedly did not sit well with the two host-comediennes, especially that she just moved to ABS-CBN less than a year ago.

PEP asked: Why? Was it the "attitude problem?"

RR EXPLAINS HER SIDE. In an earlier interview with PEP, RR said she did not want to comment on the issue.

CRISTINE LEAVING ABS-CBN. Meanwhile, the source said that the incident also gave Cristine a good reason to leave the Kapamilya station for good.

So, when is she going to announce her impending return to GMA-7?

The day she was set to return to GMA-7, the controversial actress also received ABS-CBN's offer, which entails another title role and a project tentatively dubbed Cristine Reyes presents...

But that's not to say the offer of GMA-7 is not equally enticing—a major role in a big project reportedly awaits her.

Anytime soon, Cristine is bound to make a decision. Let's all wait and see.