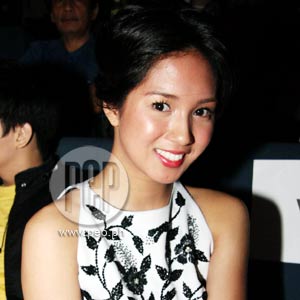 Actress and TV host Roxanne Barcelo, hopeful that her new role in Narda will jumpstart her career, says she feels really grateful to GMA-7. "It's a great feeling. I just pray that this will be the start of many more things to come for me and for other people that I'm working with now."

The actress and TV host told PEP (Philippine Entertainment Portal) on the night of July 2, at the official launch of the online Pinoy TV Flippish.com at the Fiama Bar in Makati, that she is thrilled to be chosen to play a character close to the high-flying Pinay superhero.

In the primetime fantaserye, the former Pinoy Big Brother housemate will meet Narda in an orphanage, where the two will grow up as close friends. Eventually, Narda will change into Darna, becoming the protector of the other kids, while Roxanne's character becomes the loyal "sidekick."

"Dun kami sa bahay-ampunan nagkakilala [ni Narda], so ampon din ako... I will be a good friend to Narda. I will help her. So kumbaga, siya si Batman, ako naman si Robin," she explained.

Roxanne will also act as mentor and big sister to the orphanage kids, teaching them how to sing. The former Metropop star said this is one big reason why she thinks the role fits her.

"Tinuturuan ko yung ibang ampon to sing, I teach them in choir. So it's gonna be a fun fun role for me... So I'm loving the role. Parang they all know that I'm not acting," she explained.

But will she metamorphose into another superhero later in the series?

NARDA. PEP also asked Roxanne how different GMA-7's Narda with Marian Rivera will be, compared to the GMA-7's Darna with Angel Locsin. Roxanne said Narda will have interesting twists and situations that are new and intriguing.

"This time around, yung mga writers talagang ni-reimagine ang Darna. What could happen, for example, if Narda said no to the stone? Anong mangyayari sa mundo? Ang daming twist, and even the characters have their own twists," she explained.

Narda will also be more loyal to the original comics series penned by the great Mars Ravelo in the 1950s, Roxanne said. "There were roles that they got from the '50s pa, yung original na komiks ng Darna, like babaeng linta... yung mga characters from the '50s, they brought it back out."

THANKFUL. Roxanne also said she feels very grateful to GMA-7 for giving her this role in their primetime soap, saying that she feels the role will jumpstart her floundering career.

After quitting PBB: Celebrity Edition in 2006 to attend to her college graduation, the actress said she stayed out of the spotlight because nobody was offering her work anyway.

"I had no work, no work! I had a few guestings, I had a lot of out-of-town hostings, but nothing regular... I've joined so many contests. PBB, there's MTV VJ Hunt, there's also Hollywood Dream [ABC-5]. I was really trying to get somewhere but I didn't know where," Roxanne explained.

The actress also admitted that she said "no" to many offers because they did not fit the path she wanted to take.

"I said no to sexy magazines. I really had to. You know, ang bilis, e. It promises you fame, money, work and everything... I'm just not comfortable in posing for stuff like that," the Batang Bibbo host explained, adding that she learned a lot during those tough times.