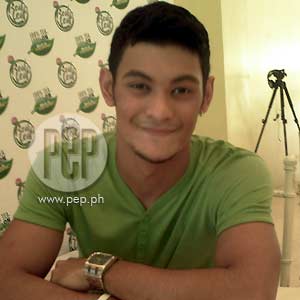 Gab Valenciano said he was personally hurt when folk singer Freddie Aguilar called internationally renowned Pinoy singers Charice and Arnel Pineda "monkeys." "I'm personally hurt because I know these people. These people are my friends... I get to work with them personally in ASAP," explained the son of Gary V.

"Honestly, I really don't know...maybe he's jealous. I'm not really scared about the words I say anymore because it's really an offense to the Filipino people to say something like that."

This was the answer of Gab Valenciano when asked what he thought of the recent comment of folk singer Freddie Aguilar, who tagged two Pinoy world-renowned artists "monkeys." The OPM artist, recognized for his internationally released single "Anak" recently told PEP (Philippine Entertainment Portal) that singers Charice and Arnel Pineda prove that Filipinos are only good at aping foreign singers. (Click HERE to read related article.)

The son of Gary Valenciano defends Charice and Arnel because they are his close friends.

"I'm personally hurt because I know these people. These people are my friends... I get to work with them personally in ASAP," Gab told PEP during the presscon for his new endorsement, Real Leaf Green Tea, earlier today, July 15, in Blue Leaf, Taguig City.

The ASAP performer added that Ka Freddie should just commend the hard work his kababayans have done to reach success.

"It's sad kasi these people worked so hard. They were nothing before and then now you're gonna call them 'monkeys'? Now you're gonna say na gaya-gaya? In reality, the people from the U.S. need them. And so where is the monkey there, di ba?" he argued.

LOVE AND CAREER. Aside from performing in ASAP '09 every Sunday, Gab said he plans to go to the U.S. to pursue film and the production of music for video games. For now though, he wants to stay in the Philippines to help his dad.

"I told myself that my dad has a couple of years, maybe three to four years when we can just keep dancing and dancing. But my dad will have to slow down one day," Gab explained.

But does he plan to marry girlfriend Rachelle Ann Go and give Gary V a grandchild?

"Marriage plans? No. But I can see her walking down that aisle," the 21-year-old dancer said.

What is the status of their relationship?

"We're awesome. For me it's a perfect tandem. Me and Rachelle, we complement each other because we're very different and we're very opposite. So I'm very very happy and I'm sure she can feel the same," Gab smiled.