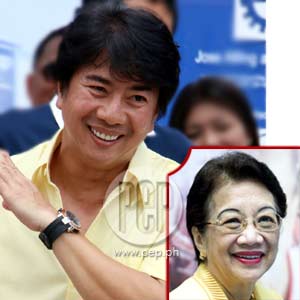 Willie Revillame's remark on national television about the simultaneous airing of the cortege of the late President Corazon "Cory" Aquino and his noontime show Wowowee continues to draw flak from various sectors.

In a written statement sent via e-mail to PEP (Philippine Entertainment Portal) earlier today, August 6, the organization condemned Willie's "arrogance" and issued a demand that the Movie and Television Review and Classification Board (MTRCB) give the controversial noontime show host "the hardest lesson."

The AFIMA was reacting to Willie's comment in the middle of Wowowee's "Willie of Fortune" segment. While the nation was deeply mourning the death of ex-president and democracy icon Corazon "Cory" Aquino, ABS-CBN decided to insert a live feed of its special coverage of the transfer of Aquino's remains while simultaneously airing the popular noontime show.

The leader and chief architect of the historic 1986 bloodless People Power revolution lay in state for two days at the La Salle Greenhills gym in Mandaluyong City before transferring to the Manila Cathedral in Intramuros, Manila.

"HE ONLY CARES FOR HIS EGO." Willie's public outburst met violent reaction from viewers, who saw his brazen action as "rude" and "totally insensitive" considering the weight of the situation.

"HE HAS BEEN AT IT NOT ONCE BUT IN COUNTLESS TIMES! His show is so popular that any bad thing he does is mistaken for a fad or 'alright' by the young. Misdemeanors to him are the general rule, good manners are the exception.

"His is arrogance and greed. What he wants is what he gets. He does not mind the dozens killed in chasing false dreams he created as a culture of his own.

"So many times he has been in it. Yet in no time has he been called to repent. He is sacred even as he desecrates. Every time he does one, he gets bolder.

"For him to demand the removal of the little window screen showing the funeral march of the woman who got ABS-CBN back from Marcos is a blasphemy of democracy, an act despicable as him fucking his own mother.

"He may have the right to demand it, but he never waited until the next commercial break to quietly do it. He expressed his angst against Corazon Aquino funeral being shown side by side his "Wowowee" right before the dumbstruck millions of Filipino viewers around the globe.

"For this, Alyansa ng Filipinong Mamamahayag (AFIMA) demands in the strongest terms for the Movie and Televisions Review and Classification Board (MTRCB) to give him the hardest lesson for him to learn."

LEFT-HANDED APOLOGY. Prior to AFIMA's condemnation, Willie, in an attempt to pacify the criticisms thrown at him following the outburst, clarified his stand on the matter by issuing an apology to the Aquino family as well as to the ABS-CBN management.

Revillame stressed that his reaction was not intended to disrespect the memory of the beloved late president. He reiterated that the somber mood brought by Cory's passing contradicted the supposed joyous vibe of his program.