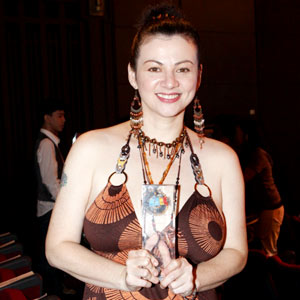 Rosanna Roces was named Best Actress for her role as Mama Saleng in the 2009 Cinema One entry Wanted: Border. This Ray Gibraltar film is now showing at Gateway, Cubao, Quezon City. It will run until November 17.

It was sweet victory for the dark comedy Wanted: Border after it bagged seven trophies in the fifth Cinema One Originals Awards held last night, November 15, at the Dolphy Theater in ABS-CBN.

The Rosanna Roces-starrer Wanted: Border won Best Film, Best Screenplay and Best Director, for writer-director Ray Defante Gibraltar. When Direk Ray accepted his first trophy, he spoke in Hiligaynon (native tongue of Iloilo where the film was shot), and during his second speech, he spoke in Tagalog. Gibraltar thanked his mother from whom he draws inspiration, his staff, the stars and crew of Wanted: Border, his supporters in Iloilo, and everyone who helped him turn his film into reality.

When Wanted: Border was announced as Best Film, lead actress Rosanna Roces was so overjoyed that she literally hoisted herself up the stage, ignoring the stairs located at the side.

Rosanna also received her second Best Actress Award for playing Mama Saleng, a flesh-eating aswang who kills her boarders, cooks the mutilated flesh, and later on serves the meat in her Iloilo eatery. As she prepared her speech, Osang jokingly asked the crowd if she could render a long speech, since it had been many years since she accepted her last award. Rosanna was last honored by Gawad Urian as Best Actress for the 2001 film La Vida Rosa.

She read on, "Kaysa maging agiw na kakain sa aking pagkatao, ang poot ay aking ginamit upang makagawa ng isang obra, isang obrang taglay ang kabaliwan ng bawat isa sa atin." Rosanna then spoke in Hiligaynon to thank the director, the production crew, as well as her children and grandchildren whom she said serve as an inspiration to continue living. The actress revealed that she once considered her life worthless.

Mikel Campos was recognized Best Actor for his role in Maximus & Minimus, a mature comedy about the romantic adventures of a plus-sized woman. Mikel, who was able to beat Baron Geisler and Enchong Dee in this category, had abundant words of gratitude for Nap Jamir, the director of the film.

Paano Ko Sasabihin, a romantic comedy about two people who converse through sign language, won Best Editing (Anna Isabel Matutina) and the 2009 Viewer's Choice Award. It stars ABS-CBN talents Erich Gonzales and Enchong Dee as two people who spark a conversation in the MRT while pretending to be hearing-impaired.

Best Sound went to Bala-Bala (Mark Laccay), a film about faith healers and their quest to unravel the mystery behind the unexpected deaths of kids and animals in a provincial town. Laccay offered the award to the late Alexis Tioseco, a recognized supporter of the local film industry.

Providing laughs and spiels for the night as hosts were comedienne and last year's Cinema One Originals jury member Eugene Domingo and matinee idol Piolo Pascual. The two stars previously worked together as actress and producer, respectively, in the comedy hit, Kimmy Dora.

VIEWER'S CHOICE AWARDS. In celebration of its 15th anniversary, Cinema One commemorated the unforgettable Filipino films by giving out awards voted on by loyal Cinema One viewers through text. The winners were:

King and Queen of Hearts - Kim Chiu and Gerald Anderson

Directed By (Most Popular Director of All-Time) - Olive Lamasan

It List! (Stars of today who we predict to make it through the next 15 years) - Kim Chiu

Among those who received their awards that night were screenwriter Ricky Lee for Himala and Piolo Pascual for Sexiest Male. The final intermission number featured ASAP '09 mainstays Nikki Gil and Sam Milby as they performed select theme songs of well-loved Filipino movies.