Dolphy advises Willie Revillame not to run for public office 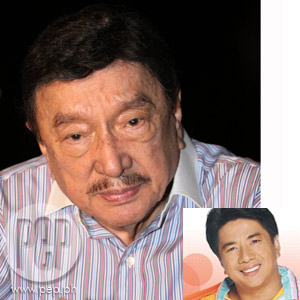 Dolphy, patriarch of the Quizon clan, considers Willie Revillame as part of his family.

Dolphy stressed: "Humility is the name of the game."

If Willie runs for public office, will Dolphy support his decision?

NOBODY, NOBODY... BUT JUAN. This year, Dolphy will return to the big screen with the dramedy Nobody, Nobody... But Juan!

He was last seen in the 2008 comedy film Dobol Trobol with his "heir apparent" Vic Sotto.

Produced by Kaizz Ventures in partnership with RVQ Productions, Nobody, Nobody... But Juan! is directed by Dolphy's son Eric Quizon from a screenplay by Bibeth Orteza. Dolphy plays Juan, an old man who stays in a nursing home located in the U.S. To alleviate his loneliness, Juan regularly watches Wowowee but because of an untoward incident, he is prohibited from watching the program. Juan resorts to drastic measures for the sake of his favorite game show.

Does Dolphy have a cutoff time when it comes to shooting?

According to a source, Dolphy once stayed until 1 a.m. on the set to finish a crucial scene.

What is the difference between being directed by his own son and by someone who is not a family member?

As the co-producer of Juan, Eric also expressed his gratitude to ABS-CBN for waiving licensing fees for the trademark of Wowowee.

PEP (Philippine Entertainment Portal) asked the King of Comedy if there was still any role that he would like to do in the future. He revealed, "Meron kaming plano, pari ako. Lumalaban sa prinsipyo. Hindi pa ako gumaganap ng pari kasi very touchy."

WHY WOWOWEE? This movie was partly inspired by the concept of the 2009 Oscar Best Picture winner Slumdog Millionaire, which showed how a young man changed his life by joining a game show.

PEP asked co-producer Joe Aldeguer why they opted to tap Wowowee and not other game shows.

Incidentally, Joe Aldeguer is also cast in the movie as one of Dolphy's sons. He was born in the Philippines but migrated to the United States when he was three years old. He works as a radio and TV personality in Chicago.

The cast members shot the movie for 13 days in the Philippines and six days in Chicago. Eddie Garcia, Heart Evangelista, Eugene Domingo, Pokwang, Vandolph, Epy Quizon and G Tongi are also part of the movie.

Nobody, Nobody... But Juan! will open in cinemas nationwide starting Christmas Day, December 25.