Regine Velasquez and Jaya talk about the finale of SOP 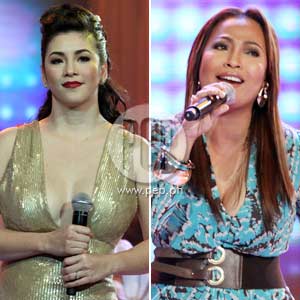 Top singers Regine Velasquez and Jaya have many things to look forward to after SOP finally aired its last episode yesterday, February 28. With the 13-year-old concert TV ended, it is now time to try new things and that is exactly what Regine and Jaya are excited about.

The top divas of the now-defunct weekend musical-variety show were all smiles, a complete contrast to their earlier expressions when they were saying goodbye on SOP's final episode.

"We were trying to smile," commented Regine. "Pero siyempre, it's sad because the show has to end already. But at the same time, we are also excited for the new show."

Regine is referring to Party Pilipinas, which begin airing on March 21.

With SOP taken out of the Kapuso station's roster of shows, did Jaya and Regine feel defeated when they learned that the show would be scrapped?

Regine looked at her friend and asked, "Did we feel bad? Ako, mostly nalulungkot lang ako kasi parang mixed ang emotions ko, like is it gonna be the same? Am I gonna see the same people on the new show? So, mayroon lang akong mga ganoon. I'm also scared 'cause 'yong expectations ng mga tao. Of course, maraming ookray."

Jaya added, "Even with SOP being 13 years na siya sa television, e, maraming umookray at maraming pumupuri. So, ito lang ang fear factor na parang may magkakagusto ba sa bagong show namin? What we did for SOP, we'll do for the new show. Maybe even more."

Regine followed this up by saying, "We will try our very best to give them the best show."

When asked if it would be hard for them to adjust to the new show, the Asia's Songbird answered, "I think it would be difficult at least for me, kasi I got used to the system already. You know how na may comfort zone ka na. May mga rituals na hindi alam kung ibe-break ba natin 'yon? But 'yon na nga, at the same time, looking forward to the new show which will happen in two weeks."

KANTASERYE ON THE WAY. The end of SOP meant the beginning of newer things for Regine and Jaya as their kantaserye Diva is now underway.

Joining Regine in Diva is Jaya, of course, who at first was apprehensive in appearing in a soap. When asked to relate about Jaya's inclusion on the new show, Regine said, "I have been encouraging her. I think bukod kay Ogie and Elizabeth Ramsey [Jaya's mom], e, she's [Jaya] one of the pinakanakakatawa na tao sa buong buhay ko."