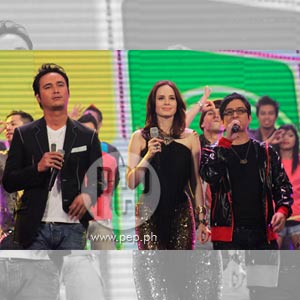 The battle for supremacy among Sunday noontime musical variety shows now becomes a three-way contest with the entry of TV5's own bet.

P.O.5, which stands for Party On 5, was formally launched yesterday, April 11, with Ryan Agoncillo, John Estrada, and Lucy Torres-Gomez leading the charge along with the network's other talents.

Coming up with its own Sunday noontime programming may come as a departure from TV5's objective of distancing its set of programs from the standard fare being offered by the two giant networks.

But director Rich Ilustre maintained that while P.O.5 is going head-to-head against its rivals, the program's theme and concept are far different, and perhaps more flexible, compared to its competitors.

P.O.5 takes more personal approach to its viewers through studio and field gimmicks by which the audience will have the chance to take home cool prizes. The program, Ilustre added, is a mixture of all the elements the Filipinos came to associate with game, musical and variety shows.

"Marami kaming games and as the weeks go on, we will have more games to encourage public participation... Hindi lang kami singing and dancing."

EVEN JUDAY ATTENDS. The program jumpstarted its debut with all the stars singing the anthemic and electrifying "Sugod" and "Taralets."

Singers Jan Nieto, Apple Chiu, Chris Cayzer, and Bituin Escalante proved they have what it takes to compete against their rivals.

One of the afternoon's highlights was Lucy Torres-Gomez's rumba dance number. She was introduced by Wilma Doesnt and Mr. Fu as "Asia's Dance Goddess"—a title Lucy earned while hosting the dance talent search show, Shall We Dance.

Lucy, however, remains unsure if she will be required to perform every Sunday. "But I'll be here of course every week as one of the regular hosts," smiled Lucy.

But the biggest surprise came from Ryan Agoncillo's wife, Judy Ann Santos, who graced the show to greet her husband a happy birthday. Ryan celebrated his birthday last Saturday, April 10, and his P.O.5 family presented him with a cake to celebrate the special occasion.

"Very thankful ako that they trusted me enough because it's my first time din to do something like this and it's a big and ang laki ng cast," Direk Rich mentioned after wrapping up the pilot episode. "This is something different and sabi nga nila, it's sort of like our banner show for TV, so very thankful ako. We promise to work very hard so that we could offer the viewers something new every week."