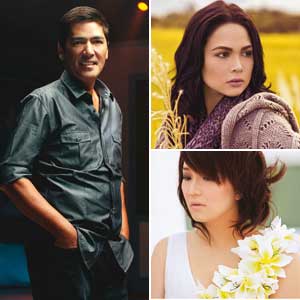 The top 3 in ranking order: Kris Aquino (lower inset), Judy Ann Santos and Vic Sotto. YES! Magazine employed a rigorous process to see which stars have been the most noteworthy in the years 2000 to 2009.

On its tenth anniversary, YES! Magazine releases what could be its most controversial list to date—The YES! List of top 20 stars who ruled the decade.

The top story in its May issue, The YES! List of top 20 stars from 2000 to 2009 was not pulled out of thin air. Its quantitative data and qualitative insight are based on extensive research: television ratings as provided by AGB Nielsen Media Research Philippines, box-office figures, record sales figures, and number of product endorsements. The sources are cited in detail in the article's postscript.

"For this list, we surveyed each star's career only during the 10 years of YES! Magazine's existence... [This] sets an immediate time frame for who does and doesn't make the list," says the article's introduction.

The ten-year period also allows YES! to see the bigger picture and acknowledge stars who have had notable achievements in the earlier part of the decade even if they have had reversals of fortune in the later years, and vice versa.

"We interviewed as wide a range of industry insiders as we could—movie producers, network executives, creative talents, star-makers, entertainment reporters—relying on them for their expertise and wisdom," says YES!, which often called on this esteemed panel of insiders to settle disputes within the team as they sat down to do the actual ranking.

But if there's one thing that truly sets the star apart from the rest of his or her peers, it is his or her influence on pop culture. YES! says, "To be a true ruler of the showbiz decade just past, a star had to have contributed to the ongoing cultural discussion—what we value, what we aspire to, how we identify ourselves."

Topping the list is Kris Aquino, who has "single-handedly redefined what celebrity means... she has blurred the lines between what's personal and what's public—and has exposed our insatiable appetite for both."

Also making it to the list are young stars Sarah Geronimo and Dingdong Dantes, Megastar Sharon Cuneta, and more.

Find out who else made the list and how they ranked by grabbing your copy of the May issue of YES!, available at newsstands, bookstores and supermarkets nationwide on Monday, April 19.

A digital edition of YES! is available on May 1, 2010 for international subscribers. Visit www.yesdigital.com.ph for subscription details.

YES! Magazine is an affiliate of PEP (Philippine Entertainment Portal).