Usher on comparison with Michael Jackson: "It's an ultimate compliment." 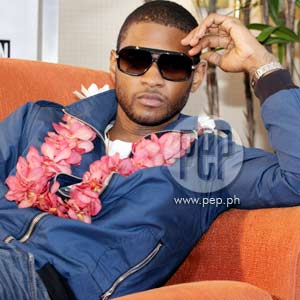 Grammy Award-winning R&B artist Usher promises to deliver the hits tonight, July 9, at the SM Mall of Asia Concert Grounds in Pasay City. "It's going to be a great show!" Usher assured his Filipino fans during a press conference held yesterday, July 8.

"I feel great... So great to be here in the Philippines and to be laid here with the press," the 31-year-old performer wisecracked in front of local reporters during a quick meet-and-greet held yesterday, July 8, at the Batanes Ballroom of the Edsa Shangri-La Hotel in Mandaluyong City.

Usher, whose full-name is Usher Raymond IV, will be performing tonight, July 9, at the SM Mall of Asia Concert Grounds in Pasay City. The concert will be Usher's first performance here in Manila. His arrival yesterday afternoon at the Ninoy Aquino International Airport (NAIA) also marked the first time he ever set foot in the Philippines.

"Music is a universal language and as I'm here, I hope to learn more about the [Filipino] culture," said Usher.

THE NEXT KING OF POP? He also made a comment on the "next Michael Jackson" tag. Usher received rave reviews from critics and fans following his heartfelt rendition of "Gone Too Soon" at Jackson's memorial service at the Staples Center in Los Angeles, California last year.

Jackson's immediate family even rushed to the stage to comfort the young singer after he broke down at the end of the number.

But more than the moving performance, the label as the King of Pop's heir apparent stemmed from Usher's versatility and the fact that some of the young American R&B singers like Chris Brown and others have all taken a backseat brought about mostly by bad publicity.

MAN OF MANY HATS. Born on October 14, 1978 in Dallas, Texas, Usher gained worldwide popularity with the release of his second album My Way in 1997. The Grammy Award-winning recording artist was responsible for the hits such as "You Make Me Wanna," "Nice and Slow," "Burn," "Confessions Part II," among others.

Usher also dabbles in acting and philanthropy, aside from owning his own record label plus a chain of restaurants. Interestingly, Usher is part owner of the NBA team Cleveland Cavaliers, whose superstar and main attraction LeBron James announced earlier today his departure from the team to join the Miami Heat.

The Manila concert tonight is part of Usher's efforts to promote his latest album Raymond v. Raymond, which has spawned the hits "Hey Daddy," "There Goes My Baby," and "OMG."