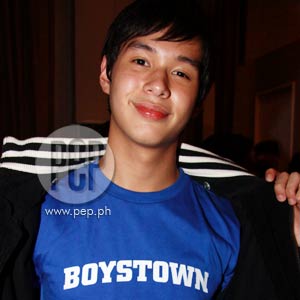 One of AJ Perez's last interviews was with Sun Star, where he expressed his excitement about appearing in an upcoming episode of Maalaala Mo Kaya: "Overwhelming and sobrang saya lang po talaga and thankful kay God for the opportunities He continuously gives me."

The cause of his death, according to reports, is "multiple head injuries," which he sustained after his vehicle was hit by a bus and a truck in Moncada, Tarlac.

Here's the official statement of ABS-CBN that was sent by the head of corporate communications Bong Osorio: "Kapamilya talent AJ Perez passed away early this morning after being rushed to a hospital in Tarlac. Together with his father, 2 road managers, a driver and an event marshal, they met a vehicular accident on their way back to Manila after a provincial show. ABS-CBN sympathizes with AJ's family on his untimely demise, and urges everyone to pray for the eternal repose of AJ's soul and for the family and loved ones he left behind."

One of the first few people to give his account of what happened was showbiz reporter Ogie Diaz, who had the chance to talk to the young actor's parents.

Mr. Perez was with his son when the accident happened.

AJ is set to star in an episode of Maalaala Mo Kaya this April 30. Prior to this, he was one of the male leads in the TV series, Sabel.

About four hours ago, his second to the last tweet @ajperez17 was about the trip: "On the way home already from Dagupan. Long drive ahead... Thanks to everybody who watched..."


AJ's body will be in La Salle Greenhills starting this afternoon until Tuesday lunchtime.