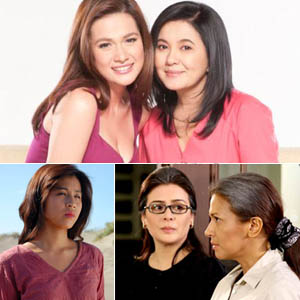 The Philippine Movie Press Club (PMPC) has just announced the nominees of the 27th Star Awards for Movies, to be held on June 17, 2011 (venue yet undisclosed).

A total of 15 mainstream features and 14 independently-produced digital productions qualified for nominations in the performance, creative, and technical categories.

Next is the Filipino musical film, Emir by Chito Roño, which tells the story of 18-year-old Amelia who works as a nanny to the son of a Sheik in a Middle East kingdom. Emir garnered 11 nominations, including best picture and direction (Chito Roño), screenplay (Jerry Gracio), new movie actress (Frencheska Farr), supporting actress (Dulce), and child performer (Mahdi Yazdian Barjani).

Coco won a double nomination, also as lead actor, of the semi-documentary film Noy, which featured President Noynoy Aquino on the campaign trail.

The other nominees in this category are John Lloyd Cruz (Miss You Like Crazy), Baron Geisler (Donor), Yul Servo (Rosario), and Fanny Serrano (Tarima).

Aside from Lorna and Bea, the other nominees in the lead actress category are Ai-Ai delas Alas (Ang Tanging Ina N'yo (Last Na 'To!), Anne Curtis (In Your Eyes), Angelica Panganiban (Here Comes The Bride), Lovi Poe (Mayohan), and Dawn Zulueta (Sigwa).

At the MMFF 2010, it was Deramas who won best director, while Martinez failed to even get a nomination and it drew mixed industry reactions.

This time, Rosario has been nominated for best direction.

Rosario got a total of 10 nominations, the third highest number which equalled those of the comedy Here Comes The Bride, written and directed by Chris Martinez.

Completing the lineup for the mainstream features is a major nomination (best picture) for the "Punerarya" episode of the horror trilogy Shake, Rattle & Roll 12.

DIGITAL INDIE NOMINEES. In the Indie-Digital category, Jerrold Tarog's other film, Senior Year, which he also wrote, edited, scored, and sound-designed won 8 nominations; including the other two nominations for production design (Benjamin Padero) and original theme song, "Kahapon," a composition by Johnny Danao.

Last year's top winners in the Cinemalaya Filmfest, like Donor, directed by Mark Meilly; and Dan Villegas' Mayohan, are major nominees in this year's Star Awards for Movies.

But neither topped the nominees' list as did Joel Lamangan's Sigwa, a period drama set against the backdrop of the first quarter storm in the '70s, with 14 major and technical nominations; including those of Joel Lamangan (direction), Boni Ilagan (screenplay), Tirso Cruz III (supporting actor), Gina Alajar and Zsa Zsa Padilla (supporting actress), and Edgar Martin Littaua (production design).

Also in the list of the nominated indie-digital films is another period romantic drama, Unitel Pictures and Unico Entertainment's The Red Shoes by new director, Raul Jorolan and writer James Ladioray.

Here's the complete list of nominees for the 27th Star Awards for Movies:

Digital Movie of the Year

Movie Director of the Year

Movie Production Designer of the Year