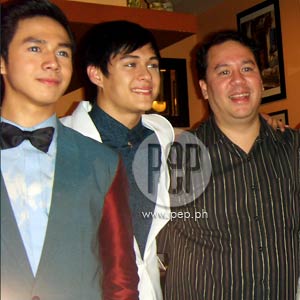 Mr. Gerry Perez (right) said that he was impressed by the performance of Sam Concepcion (left) and Enrique Gil (middle) in the Star Cinema movie Way Back Home. His son, AJ Perez, was supposed to play the part given to Sam.

As soon as Sam Concepcion and Enrique Gil saw Mr. Gerry Perez at the Chef's Quarter restaurant in SM Megamall last night, August 16, they gave him a long hug.

Mr. Perez, the father of the late actor AJ Perez, attended the premiere night of Way Back Home along with his wife Marivic and son Gelo.

AJ should have been part of this Star Cinema movie if he didn't die in a vehicular accident that took place in Tarlac last April 17. (CLICK HERE to read related story.)

Mr. Perez says that he misses his son every day.

When PEP.ph asked Mr. Perez how he and his family are holding up, he said, "We're coping. We're doing it every day. It's AJ's fourth [month] anniversary."

Before the start of the screening, the one who led the opening prayer hoped that AJ was smiling down on them last night.

When asked for his assessment of the performance of Sam and Enrique, Mr. Perez said, "They did a good job. They remind me of AJ," he said with a smile.

"I'm happy for them. I'm proud of these two guys."

He revealed his fondness not just for the two boys but their parents as well.

"I would like to look at them beyond showbiz. I know his father [Sam's dad] very well and his mom is a good friend."

"Not everyone would know this but the first commercial of AJ was with Sam's dad. So, the resemblance is there."

As for Sam, he said that he is reminded of his good friend everytime he is called by his character's name named AJ.

Was it Sam's intention to mimic AJ's mannerisms in the movie?