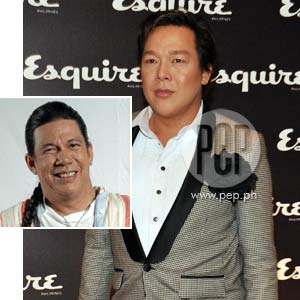 The resolution written by Quezon City Assistant Prosecutor Liezel Aquitan-Morales states that the respondent Sucaldito, a columnist for the tabloid Bandera, "did not only report facts as coming from his source but... rendered judgment regarding the truthfulness of his narration without verifying the truth first."

It can be recalled that on February 19, 2011, Bandera published an article titled: "KAYA MUNTIK MAKUYOG, SWEET NAGWALA SA BAR."

According to the resolution obtained by PEP.ph (Philippine Enetertainment Portal) this morning, October 6, the article "conveyed the idea that he was treating men as prostitutes," "projected him as shame to the homosexuals, and "contained insults that discredited" the very person of Lapus "for having no respect for others."

In the article, Sucaldito also esteemed himself as the better homosexual than Lapus, calling himself a "more lovable person who knows how to respect men."

While the article reports that the "pagwawala" incident took place at Library Bar, Sucaldito's source, Francis Bueno, has executed an affidavit stating that Lapus was, in fact, in Fab Bar and not in Library Bar.

The separate affidavits of Francis Bueno and Alex Pineda also stated that they never said Lapus was guilty of "pagwawala."

Although Sucaldito contends that the article consists of "fair comment" on Lapus's conduct inside the bar, the fiscal's resolution states that Sucaldito's choice of words "were mostly uncalled for," suggesting that the columnist's objective was to tarnish the Showbiz Central host's reputation.

Moreover, the fiscal's resolution concludes that Sucaldito was inevitably urged "with professional rivalry with the complainant" in an industry where both work.

He adds, "I will fight this case to the finish."

Aside from the libel case, he says he is also planning to sue Sucaldito's witnesses for perjury.

He ends his brief statement with, "Salamat sa lahat ng dasal at suporta. I'll see them in court."

While he confirms that he is aware of the fiscal's decision favoring Lapus's complaint, Sucaldito states, "That doesn't mean that I lied."

With conviction, the columnist states, "I stand by my story, and I will fight it to the end. Anyone is presumed innocent until proven guilty."